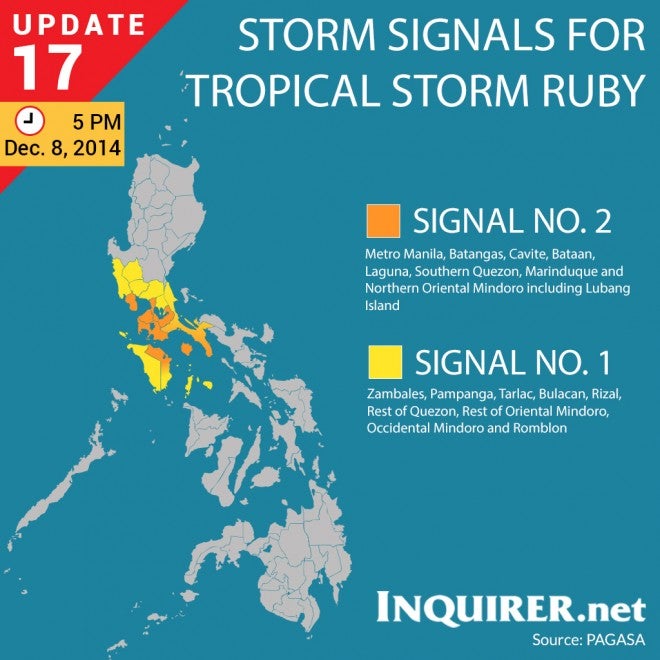 MANILA, Philippines – A waning Tropical Storm Ruby made its fourth landfall in Laiya, Batangas at 5:45 p.m. Monday after it earlier left at least 21 people dead and forced more than a million people into shelters in many parts of Bicol and the Visayas regions.

While the worst was over in Eastern and Central Visayas regions where the sun peeked Monday after days of grim weather, Manila and outlying provinces braced as Ruby blew nearer with maximum sustained winds of 85 kilometer per hour and gusts of 100 kph.

Although it has weakened to 85 kph, Ruby still dumped rains in Batangas and nearby provinces while heading toward west northwest. Although considerably weaker from its peak power, the storm remains potentially dangerous and could still whip storm surges that could overwhelm coastal villages, weather forecasters said.

NOTE: No work at UP MANILA and Ateneo Loyola heights campus 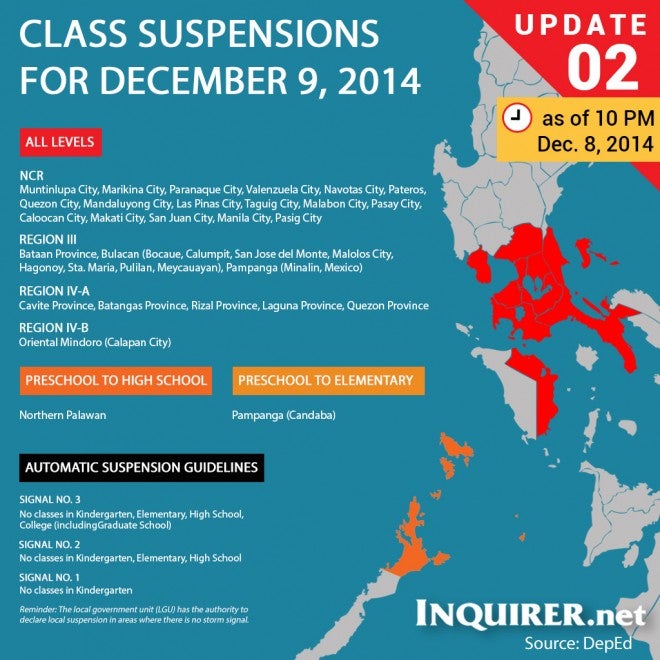 –     The Philippine Airlines on Monday said it would begin normal operations by noon of Dec. 9 when Ruby is expected to exit Manila.

Officials have expressed relief that the typhoon had not caused major damage.

Traumatized by the death and destruction from Typhoon Yolanda last year, more than 1 million people fled to emergency shelters and safer ground. Many have started to troop back home after the typhoon had blown past their provinces, Philippine Red Cross Secretary-General Gwendolyn Pang said.

“The worst is over for them. It’s a big relief because they really got scared of this typhoon with Yolanda in their minds,” Pang said.

Ruby left at least 21 people dead, including 16 villagers who drowned in Eastern Samar province, where the typhoon made its first landfall, according to the Philippine Red Cross. The government disaster-response agency has reported only five deaths, including three people who died of hypothermia, saying it was still verifying other reported casualties.

Displaced villagers have been asked to return home from emergency shelters in provinces where the danger posed by the typhoon had waned, including Albay province, where more than half a million people were advised to leave evacuation sites.

Nearly 12,000 villagers, however, will remain in government shelters in Albay because their homes lie near a restive volcano. With reports from Associated Press, Frances Mangosing, Maila Ager, Tetch Torres

Read Next
Tacloban tent residents get priority for new homes
EDITORS' PICK
Nestlé Philippines’ ‘NESCAFÉ Plan’ bags Grand Anvil at PRSP 56th Anvil Awards
Smart reinforces superiority with best speed and mobile video experience in PH
Every Filipino home can now be a smart home with realme TechLife
New 3,045 COVID-19 cases push PH total active cases to 40,074
LTO’s P500-M deal for screws draws scrutiny
How to lose a PH genius: Wesley So officially a US citizen
MOST READ
US lays out list of aid to ‘satisfy’ Duterte following VFA payment demand
How to lose a Filipino genius: Wesley So officially a US citizen
Robredo on Sara Duterte leading poll surveys: Why are Filipinos drawn to leadership of this kind?
Kris Aquino dispels rumors on son Josh getting married, thanks Ogie Diaz for defending him
Don't miss out on the latest news and information.