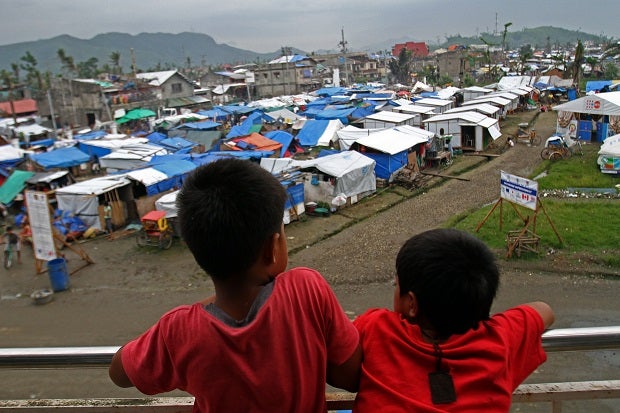 TACLOBAN CITY, Leyte—Two hundred families living in tents for more than a year since Supertyphoon “Yolanda” demolished their homes have something to be thankful for to Typhoon “Ruby.”

Since Ruby’s strong winds flattened the tents in San Jose district, the city government will now have to prioritize the transfer of the families to the transitional houses.

Families living in bunkhouses, however, would have to return to them even if these were damaged by Ruby.

Those living in bunkhouses and tents were among the 17,000 families who were moved to 26 evacuation centers in Tacloban before Ruby came ashore in Eastern Samar Saturday night–a decision that saved their lives.

The tents and bunkhouses were no match to the strong winds of Ruby. But no one was hurt since the occupants had been moved to the evacuation centers.

The “zero casualty” was a piece of good news for Tacloban, which was considered Yolanda’s ground zero where more than 2,000 people died.

A day after Ruby lashed Tacloban, Gemma Fabi, 32, of Barangay 89 in San Jose district, returned to find her tent flat on the ground.

“We have nowhere to go,” said the mother of three children. She lost a daughter, Gemmarose, to Yolanda.

Another resident, Sherelyn Pedrosa, 38, eight months pregnant, said she was hoping the city government would now give her family a permanent house strong enough to withstand a powerful typhoon.

She said she didn’t want to move into another tent after having lived in one for more than a year.

Idelbrando Bernadas, City Disaster Risk Reduction and Management Council officer, said these 200 families would be given priority to transfer to transitional houses in Barangay Cabalawan, about 13 km north of the city center.

He said the families, scattered in different evacuation centers, would be transferred before the week is over. The transitional houses, which have a floor of area of 40 square meters, are made of nipa shingles and coconut lumber.

Bernadas said the houses were ready for occupancy by Yolanda survivors affected by Ruby.

When told of the promise, Pedrosa and Fabi said they hoped it would be fulfilled.

“We are tired of living inside a tent which is no longer livable considering that it has been worn out and has lots of holes,” said Fabi.

Seventeen bunk houses in Caibaan, Sagkahan were damaged by Ruby but the occupants would not be moved to transitional houses. Instead, they will go back to the bunk houses after repairs are done, said Bernadas.

Domingo Eraya, 48, camp leader at the bunkhouse, said the repair was being undertaken by the International Organizatiomn for Migration.

“They provided the materials and about 40 men were hired to do the repair works,” Eraya said.

The men, who are paid of P300 by IOM as cash-for-work, are expected to finish the repairs in two days. The bunkhouses’ roofs were destroyed.

But the occupants were not enthusiastic about returning to the temporary shelters hastily constructed by the Department of Public Works and Highways last year to accommodate families rendered homeless by Yolanda.

Marilyn Regneter, 43, said she didn’t feel secure in the bunkhouse because another storm might hit the city.

“We are already tired living in the bunkhouse. It was destroyed by Ruby, proof that it is not really resilient…. Hopefully, our government will really think fast in transferring us to a permanent shelter,” said Regneter, who lives with her four children and six grandchildren.

Along other families, she transferred at the nearby Chinese Cemetery during Ruby’s onslaught last Saturday.