Aquino on ‘Ruby’ preparation: We should be wiser after ‘Yolanda’ | Inquirer News

Aquino on ‘Ruby’ preparation: We should be wiser after ‘Yolanda’

MANILA, Philippines–“Failure of priorities is unforgivable.”

“I’ll not be very patient with excuses after this event,” Aquino said at the conference of the National Disaster Risk Reduction and Management Council held in Camp Aguinaldo. 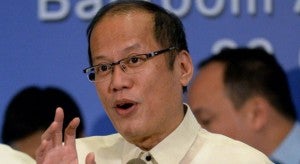 Ruby is forecast to make landfall in Eastern Samar at 8 a.m. on Saturday morning then it will cross Samar at 2 p.m.; Masbate at 8 p.m. and then Romblon at 8 a.m.

Critical areas in parts of Luzon, Visayas and Mindanao have been identified by the state weather bureau.

“You’re saying 50 provinces of 81. This is a lot worse than Yolanda but we’re supposed to be more experienced and more knowledgeable after Yolanda so we should be able to do a lot more,” Aquino said.

The President also asked for clarification whether the track of the typhoon was already certain, and if it was possible that those declared in safe adjacent areas would be at risk.

“When Ruby started we are following five models. Two of them will recurve to Japan and three will make landfall kaya sabi sa amin 60-40,” Department of Science and Technology Secretary Mario Montejo said.

“So we will put all our eggs in one basket? Safe yun?” Aquino asked Montejo.

Typhoon ‘Ruby’ intensifies, slows down; 8 areas under Signal No. 2