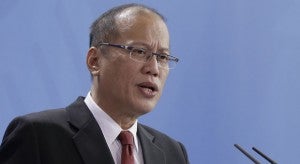 Chief Justice Maria Lourdes Sereno was at a Palace conference on the government’s compliance with an international anticorruption treaty when the President directed Budget Secretary Florencio Abad to attend “posthaste” to the judiciary’s need for additional budget as a key institution in the fight against corruption.

“And since the approving authority is present also, perhaps we can lobby them for the speedy inclusion of what is necessary to help the judiciary in our common fight against corruption amongst others, making sure we are compliant with all the directives,” Mr. Aquino said.

In her speech, Sereno cited the judiciary’s “push for the modernization of our courts and automation of our processes because we strongly believe that technology can be an effective anticorruption tool as it minimizes the areas of human intervention.”

“This is the reason why we continually appeal for additional budgetary support,” she said, noting that the judiciary’s “e-subpoena” program had increased the attendance of police witnesses in Quezon City hearings by 97 percent.

Mr. Aquino and Sereno were seen exchanging pleasantries during the second state conference on the implementation and review of the United Nations Convention Against Corruption (Uncac) in Malacañang.

As a signatory to the treaty, the Philippines is “obliged to implement preventive and punitive anticorruption measures, including asset recovery, affecting their laws, institutions and practices,” according to an Uncac primer.

In July, the President publicly assailed the Supreme Court on a number of occasions for ruling against the DAP, a mechanism the executive branch used to pool savings even in the middle of the year and reallocate it for other programs or projects. He ruled that the decision “run the risk of putting our country’s development in a state of paralysis.”

In the Uncac conference, Sereno also found herself in the same room with Bureau of Internal Revenue (BIR) Commissioner Kim Henares, who earlier assailed Supreme Court justices for rejecting her request for their statements of assets, liabilities and net worth.

Sereno sought to clear the air in her speech, saying: “To clarify we never intended to deny the BIR the SALNs per se. It was the way that the request is made that is important for the court and as the media has reported, she now can get a copy of the SALNs of the Sandiganbayan justices.”

In a previous interview with the Inquirer, Henares said the BIR wanted to know if Supreme Court justices “paid the right tax.”

The Uncac conference gathered other top government officials, each with his own role in the Philippines’ compliance with the treaty signed by 172 other countries. Among the officials were Senate President Franklin Drilon, Speaker Feliciano Belmonte, Ombudsman Conchita Carpio Morales and Justice Secretary Leila De Lima.

The President said “more is at stake here than just the implementation of a single project, or the attainment of 100-percent compliance with Uncac.”

“With the 2016 elections not too far off, let us always remember that we are working to make change permanent, to make the commitment to good governance a commitment that lasts beyond this administration,” he said.

Supreme Court spokesperson Theodore Te on Tuesday shared in his personal Twitter account the President’s directive to Abad, reflecting his positive take on the news. He declined comment.

A source privy to the workings of the judiciary’s budget thought it was about time the government gave it a second look, citing how underfunding has hampered efforts to implement reforms in the system.

“Welcome but not enough … Threat to judicial independence exists with low budget of the judiciary,” said the source, who refused to be identified for lack of authority to speak on the matter.

The source cited how the judiciary’s 2015 budget—P20.3 billion as requested by the Department of Budget and Management, or P12 billion less than what the judiciary proposed—was just 0.82 percent of the total P2.6-trillion national budget, consistent with the downtrend in the sector’s share of the pie over recent years.

“For this year, the judiciary just got 0.82 percent of the budget. For every 100 pesos spent by government, the entire judiciary only got authority to spend 82 centavos,” the source noted.

He cited how Congress last year rejected the judiciary’s request for a P4-billion budget to hire legal researchers for each trial court in the country, which “would have assisted trial court judges dispose of their cases more efficiently.”

The source also noted how trial court judges got allowances from local government units (LGUs) “because their salaries are not enough.” Hence, he said, litigants “avoid suing” LGUs.

“The larger issue is this: If the government expects independence and neutrality from our courts it should invest the right amount for its judges and the facilities. If it wants us to continue this momentum against corruption, it should provide enough for our lower court judges. They are the most vulnerable to threats of all kinds,” he said.

On orders of the high court, the Court of Appeals is also currently investigating trial court judges and other court officers for alleged corrupt practices.

Sereno had several times called on Congress and the national government to support the judiciary’s reform efforts, including the automation of court processes to speed up the resolution of cases.