Mercado back from US, raring to debate Binay | Inquirer News

Mercado back from US, raring to debate Binay 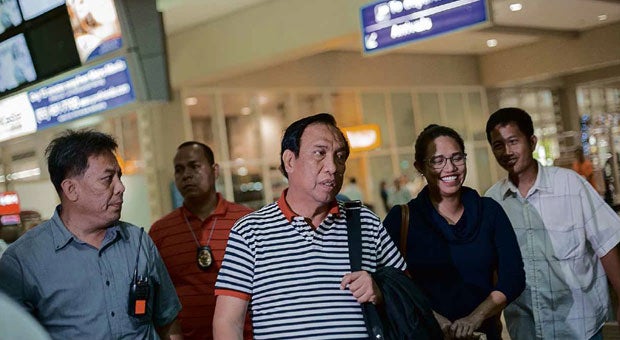 IT ISN’T OVER Former Makati Vice Mayor Ernesto Mercado returns to Manila after visiting his ailing wife in the United States. He is challenging Vice President Jejomar Binay, whom he accused of amassing ill-gotten wealth when he was Mayor of Makati City, to a debate “to know who is telling the truth.” JILSON SECKLER TIU

Former Makati City Vice Mayor Ernesto Mercado has returned from his visit to the United States and is ready to face his former friend and ally, Vice President Jejomar Binay, for a debate.

“I’m back and I like to reiterate my challenge to the Vice President for a face-off or debate to know who is telling the truth and who is lying,” Mercado told the Inquirer on Tuesday morning.

Mercado, who issued the challenge while he was abroad, said Binay could name the place and the time for the debate.

The former vice mayor left for the United States after a Senate blue ribbon subcommittee suspended its hearing on the alleged overprice of the Makati City Building II, a carpark built when Binay was mayor of Makati.

Mercado is a key witness in the ongoing Senate inquiry into corruption allegations against the Vice President and has been accepted to the Witness Protection Program of the Department of Justice.

He has provided testimonies and documents to the Senate blue ribbon subcommittee linking Binay, who has declared his intention to run for President in 2016, to alleged anomalies.

Mercado accused Binay of rigging infrastructure projects in Makati and profiting from them.

Apart from the allegedly overpriced P2.28-billion carpark, Binay has been accused of owning a 350-hectare high-end farm in Rosario, Batangas province, and condominium units in Makati through dummies. The Vice President has denied the charges.

Away for more than two weeks, Mercado arrived on Monday evening on board Philippine Airlines from Los Angeles.

He said his trip had the permission of the proper authorities and the Witness Protection Program.

The inquiry into charges of corruption and ill-gotten wealth against Binay is expected to resume in January.

Mercado’s foreign trip has fueled speculations that he went to the United States to gather more evidence against Binay.

But he said his travel was personal and had nothing to do with Binay.

“We will not be surprised if he says he has documents showing that the VP owns Disneyland,” Salgado said in a text message.

Thinking that Mercado had more goods against the Vice President, the latter’s political spokesperson, Cavite Gov. Jonvic Remulla, said Mercado was a “proven perjurer who has nothing good to say.”

“The Vice President is too busy working to be distracted,” Remulla said in a text message.

Asked whether Binay had anything to worry about and whether he planned to take any legal action against Mercado, Remulla said: “He’s confident of the end game toward Malacañang.” With a report from Christine O. Avendaño

‘Mercado visiting kin in US, not fleeing PH’

Mercado has more ‘goods’ on Binay