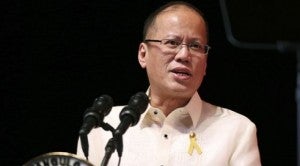 MANILA, Philippines—President Benigno Aquino III on Tuesday reversed his stance against the judiciary and asked the Department of Budget and Management and Congress to provide the “necessary” budget in order for the judiciary to carry out its reforms.

In a speech during the second State Conference on the United Nations Convention Against Corruption, Aquino said providing the judiciary its much needed budget will make the government compliant with the directives of the high court.

“[Secretary] Butch [Abad], I hope you took note of budgetary requirements of the judiciary that should be attended to posthaste, and since the approving authority is present also, perhaps we can lobby them for the speedy inclusion of what is necessary to help the judiciary in our common fight against corruption amongst others, making sure we are compliant with all the directives,” Aquino said.

Aquino has been assailing the Supreme Court over the past months after the high court ruled that some provisions of the Disbursement Acceleration Program were unconstitutional.

In the 2015 national expenditure program presented to Congress, the judiciary’s proposed budget was slashed by P12 billion. During the budget deliberations, the Supreme Court revealed that it has been suffering from a decreasing budget share under Aquino.

Sereno has asked Congress for funding for various projects such as procurement of additional computers and printers for the eCourt system which seeks to hasten resolution of cases.