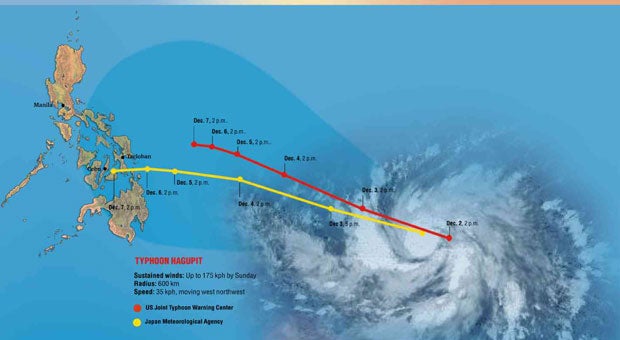 An incoming typhoon may make landfall in the region devastated by Supertyphoon “Yolanda” (international name: Haiyan) only a year ago, the weather bureau warned on Tuesday.

In a news conference, the Philippine Atmospheric, Geophysical and Astronomical Services Administration (Pagasa) projected that the typhoon would make landfall in Eastern Visayas on Sunday.

By that time, the typhoon (international name: “Hagupit,” Filipino for lash) would have further intensified with sustained winds of up to 175 kilometers per hour, dumping intense rains and whipping up waves into a four-meter storm surge.

The cyclone will be named Typhoon “Ruby” once it enters Philippine territory.

A typhoon with sustained winds above 220 kph is considered a supertyphoon.

But winds howling at 175 kph are capable of blowing away roofs, destroying houses and structures made of light materials and toppling trees, electric posts and even cell site steel towers, said Rene Paciente, senior weather forecaster for the Pagasa.

Mahar Lagmay, director of Project Noah (Nationwide Operational Assessment of Hazards), said that with a clearer forecast by Friday, or 48 hours before the estimated landfall, Noah would issue storm surge warnings showing not only the height of the waves but how far inland the flooding would reach.

Lagmay said Noah was able to forecast the height of the storm surge two days before Yolanda made landfall.

But he said Noah lacked then the updated maps of coastal communities in the Visayas that it needed to simulate the extent of flooding from the storm surge.

With a 600-km radius, the typhoon would cover southern Luzon, the Visayas and northern Mindanao, according to Pagasa.

The weather bureau gave the warning two days before the cyclone entered the Philippine area of responsibility.

Assistant weather services chief Rene Paciente said the typhoon’s effects would start to be felt on Friday, by which time Pagasa would have a better forecast of its strength and track.

Pagasa said it was possible that Eastern Visayas, the region most devastated in November last year by the strongest recorded typhoon in history to make landfall, would again bear the brunt of the typhoon’s strength.

“A possible scenario is that it will make landfall in Eastern Visayas on Sunday,” Paciente said, adding there was also the possibility the typhoon may veer northward toward Japan and not hit a landmass.

He said there was also the possibility it may make landfall in Bicol or in northeastern Mindanao.

Currently about 2,000 km away from Mindanao, the storm continued to intensify with winds up to 90 kph as it barreled over the Pacific Ocean at 35 kph. It was moving west northwest toward the Philippines.

“As of this time there is no possibility yet it will become a supertyphoon,” said Pagasa deputy administrator Landrico Dalida Jr.

Lagmay described as “outdated, wrong, misleading” news reports about the Commission on Audit (COA) 2013 finding that Pagasa was “ill-equipped” for forecasting major typhoons.

He said Pagasa had addressed the suggestions raised by COA.

“Many things have already happened in a year. We now have the storm-surge inundation maps. It’s wrong to say that we don’t have early warning on storm surge. If Pagasa is ill-equipped, how could we have predicted the storm surge two days ahead of Haiyan (Yolanda),” he said.

Lagmay said the COA report made “very good” suggestions but the news reports “made the wrong interpretation.”

He said the storm-surge hazard maps would be disseminated to warn the public and authorities through the Project Noah website, beta.noah.dost.gov.ph.

The maps would show the storm-surge affected areas and the safe areas for evacuation.

‘Hagupit’ may intensify into typhoon

‘Hagupit’ may enter PAR on Thursday