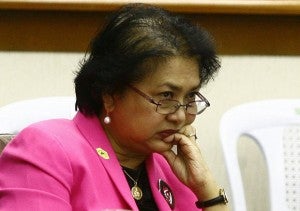 Binay asked Tan if the COA could reveal the audit highlights on other agencies other than the Department of Agrarian Reform and two related agencies.

Tan said the COA could not do so until it has finished auditing all government agencies involved in the Malampaya scam.

“As a matter of policy, we do not disclose the results of audit until we are ready to release. Kasi in the course of the review, baka may magbabago pa po depende pa po sa aming audit evidence,” Tan said.
Binay then questioned why the COA released the audit highlights on the Makati City Hall Building 2 when the audit was still ongoing.

Binay said it was a representative from COA.

“If I remember, I have not disclosed any audit findings in any hearing,” Tan said. “Are you referring to the Makati carpark building (probe), Madam?”

“I don’t think those were audit findings. Those are red flags,” the COA chief said.

“No, they submitted preliminary findings and they disclosed it during the (Makati building) hearing,” Binay retorted.

To which the senator said, “Yun na nga eh. Initial pa lang, it was already disclosed.”

“Meron po nung umpisa but since we went through with it already, we cannot disclose the results of the audit,” Tan said, adding that since it was already evaluated by state auditors, the results cannot be revealed.

Binay then asked to subpoena the documents of the audit highlights.