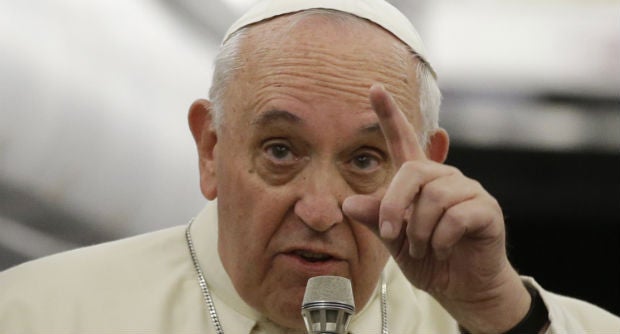 Pope Francis talks during a press conference aboard the flight towards Rome, Sunday, Nov. 30, 2014. AP

Pope Francis on Sunday urged Muslim leaders worldwide to “clearly” condemn terrorism carried out in the name of Islam.

In a press briefing on board the plane carrying him back to Rome after a three-day visit to Turkey, Francis responded to a question about the Islamic State and other jihadist groups by repeating what he said he had told Turkish President Recep Tayyip Erdogan in a private meeting on Friday.

“I told him it would be wonderful if all the Muslim leaders of the world — political, religious and academic, spoke up clearly and condemned” the violence which damages Islam, the pontiff said.

“That would help the majority of Muslims if that came from the mouths of these political, religious and academic leaders. We all have need of a global condemnation,” he added.

The pope went on to acknowledge that current global crises had generated a danger of all Muslims being tarred with the same brush.

“It is true that in the face of the acts being committed not only in this region (Iraq, Syria) but also in Africa, there is a certain reaction of repulsion: as if that is what Islam is.

“I get angry. So many Muslims are offended and say ‘we are not these people, the Koran is a work of peace.”

The pope attacked those who say “all Muslims are terrorists,” adding: “As we cannot say that all Christians are fundamentalists.”

The Argentinian leader of the world’s Catholics also denounced what he termed the current wave of “Christianophobia” in the Middle East, accusing Islamist radicals of “hunting” Christians while certain officials acted as if “they did not want any left in these countries.” The pontiff did not specify which countries he was referring to.

Aquino doubles security due to ‘credible threat’ vs Pope