Tensions high in Hong Kong after night of clashes 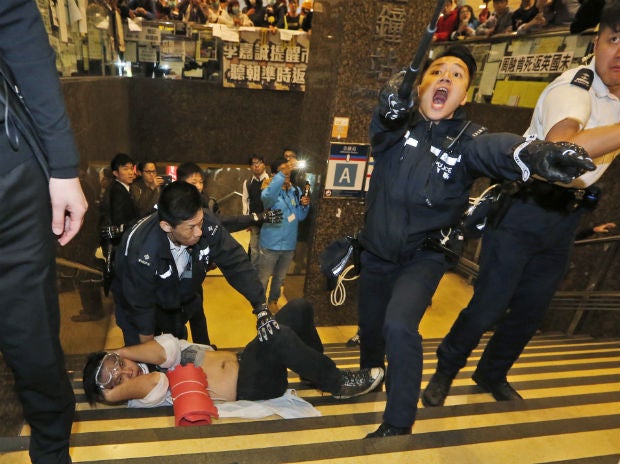 A protester lies on the stairway as police try to remove him and others from a tube station near government headquarters in Hong Kong Monday, Dec. 1, 2014. AP

With morning rush hour under way, fresh scuffles broke out between police and demonstrators at the main Admiralty protest site.

Tearful protesters were forced from the government site and roads were cleared for traffic, but government offices remained closed with the de facto parliament suspended.

Emotions continued to run high with clashes between police and protesters at a shopping arcade near the Admiralty site, with at least one person stretchered away, according to an AFP reporter at the scene.

In chaotic scenes overnight, hundreds of protesters wearing helmets and wielding umbrellas spilled into a major road outside the office of Chief Executive Leung Chun-ying as police tried to beat them back with batons and pepper spray.

China’s communist authorities insist candidates for the 2017 vote must be vetted by a loyalist committee, which the protesters say will ensure the election of a pro-Beijing stooge.

Police said they had made 40 arrests overnight and 11 officers had been injured.

Several protesters were injured in the overnight clashes. One was seen led away by police with a bloodied face, while others were tended to by first-aid volunteers after being fired at with pepper spray.

Protesters wore builders’ hard hats and used umbrellas — which have come to symbolize the pro-democracy movement — to shield themselves from the pepper spray.

Police had to dodge helmets and bottles that were lobbed through the air. One officer was carted into the back of an ambulance on a stretcher.

“I’m more determined than ever, because the police are abusing their power,” protester Kelvin Lau told AFP.

“This is a long-awaited escalation of action. It should have happened ages ago.”

Some at the Admiralty site Monday said they feared a wholescale police clearance.

“I think they will clear the whole camp. It’s all or nothing,” said 19-year-old student Yoki Tin.

The protests drew tens of thousands of people at times during their first weeks, but the numbers have dwindled as the movement’s leaders struggle to keep up momentum.

Frustrations have grown amongst the demonstrators as Beijing refuses to budge on the vetting of candidates, while support has waned among residents grown weary of the transport disruption.

Hundreds of tents continue to block a long stretch of a multi-lane highway outside government headquarters in central Hong Kong, while a smaller camp blocks another busy road in the shopping district of Causeway Bay.

Police cleared a third protest site in working-class Mongkok last week, making more than 140 arrests, but sporadic scuffles have continued there between police and crowds of angry demonstrators.

A British colony until 1997, Hong Kong enjoys civil liberties not seen on the Chinese mainland, including freedom of speech and the right to protest.

But fears have been growing that these freedoms are being eroded.

The fresh clashes came as a group of British lawmakers investigating Britain’s relations with Hong Kong were told China will not allow them into the former colony.

No Filipino involved in double murder case in Hong Kong—DFA