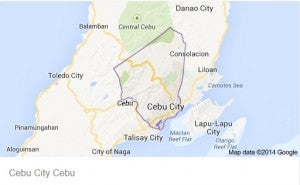 CEBU CITY — A 43-year-old grandmother was killed after she was hit by rocks that fell from the mountains in Sitio Campo 5, Barangay Manipis, in Talisay City early Monday.

The fatality, Mila Dablo, her husband, Eric, 45, and two grandsons aged 2 and 3 were traveling along a road in Manipis at about 4:30 a.m. when a rock slide occurred.

Eric and the two children were hurt and were brought to a hospital for treatment of bruises.
Talisay City councilor Danny Caballero said they already cordoned off the accident area to warn motorists.

Caballero surmised that the 7.5 magnitude quake that hit Cebu on October 15, 2013 affected the stability of the mountain while the heavy rain brought by tropical depression Queenie last week could have loosened the rocks.