The proposed P2.606-trillion national budget for 2015 may yet be the administration’s preparatory budget for the 2016 elections, Sen. Miriam Defensor-Santiago said on Thursday.

“It is meant to give more money to the President’s allies and to government departments [that] are viewed as crucial to the [results] of the elections,” Santiago said when asked if the 2015 budget could be considered an election budget.

Santiago said that in the P104.5-billion budget of the Department of the Interior and Local Government (DILG), there were appropriations for items that were not part of the department’s main responsibility.

One such item is the funding for water service, a function that belongs to the National Irrigation Administration (NIA), she said. 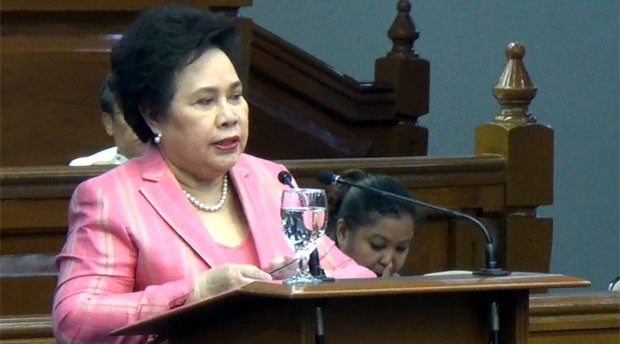 “There is no more grassroots agency closer to the voters than the DILG. But why does it have [large] appropriations for items that are not clearly indicated as part of its mandate?” Santiago told reporters after speaking at the Pamantasan ng Lungsod ng Maynila.

Liberal Party (LP) secretary general Senen Sarmiento has explained that the funding for water services in the DILG budget was not related to irrigation.

The Salintubig project was designed to improve health and sanitation and provide water to rural communities in accordance with the Millennium Development Goals, he said.

Santiago, in a privilege speech on Monday, claimed that the 2015 budget contained some P37.3-billion in pork barrel, and had a loophole that would allow the declaration of savings any time of the year.

She questioned the allocation of a sum for a water system in the DILG budget.

“Are these local politicians expecting some windfall during the campaign period? Is that why the budget is skewed like that?” she said.

The Senate approved the budget measure on Wednesday night, and hoped to reconcile its version with the House of Representatives’ next week so it could be signed into law by President Aquino before year-end.

On Thursday, Santiago maintained that the consultation with legislators to identify priority projects reeked of pork barreling.

“In other words, there may be no separate item called Priority Development Assistance Fund (PDAF), but the funds have already been built into the proposed 2015 budget,” she said, referring to the pork barrel that the Supreme Court struck down as unconstitutional last year.

“These funds, regardless of the name, may be considered pork barrel because they are national funds used for local projects selected by legislators, and they are granted in lump sums,” she said in a separate statement.

Santiago agreed with the definition of savings in the Senate version of the national budget.

The Senate defined savings as balances of “unobligated” appropriations arising from the difference between a project’s approved budget and contract award price; final discontinuance of a program, activity or project; inability of an agency to implement a program due to external causes, and decreased cost of a project.

“That is the technicality on which Senator Escudero and I agree,” Santiago said, referring to Sen. Francis Escudero, the finance committee chair.

“My objection is this: If you define savings as an act of discontinuance and disallowance then you can stop a project at anytime and then resume it maybe next year or in some other future time, but with this amendment that will no longer be possible. I agree therefore that the mere insertion of the word ‘final’ disapproval will serve to ward off any evil that I’ve been warning against,” she said.

Escudero, speaking at a news forum in the Senate on Thursday, said a test case was needed to determine the extent of prohibited postenactment intervention by lawmakers in the execution of the budget.

In striking down the graft-ridden PDAF and the DAP, the Supreme Court also prohibited lawmakers from intervening in the implementation of the budget after its passage.

Under the previous system, the lawmakers used the PDAF to identify “hard” or infrastructure projects to be implemented after the budget approval, as well as to fund their “soft” projects such as educational and medical assistance.

But some lawmakers believe that even without the PDAF, they can endorse people asking them for help to programs of executive departments, such as those for medical assistance or education.

Escudero said he believed this was postenactment intervention prohibited by the Supreme Court ruling on the PDAF. He said he no longer endorsed people to executive agencies for assistance.

But he said the extent of postenactment intervention was not expressly stated in the Supreme Court’s PDAF ruling.

The matter needs to be tested to determine what the lawmakers could or could not do in relation to the decision, he said.

“There has been no case yet filed to test the actual definition of postenactment based on the definition of the court,” Escudero said.

He said there were many factors to consider in determining if recommending beneficiaries was prohibited or not.

But Escudero said he would rather not second-guess the Supreme Court on the matter and would leave it to the judiciary to resolve should a case be filed.

The Senate’s version of the 2015 budget bill includes a provision stating that postenactment intervention is not allowed. Escudero said the provision was copied from the Supreme Court ruling.

The provision states: “Nothing herein shall be construed to authorize legislators… to intervene, assume, or participate in any of the various postenactment stages of budget execution, such as but not limited to the areas of project identification, modification and revision of project identification, fund release and/or fund realignment, unrelated to power of congressional oversight.”

The Senate, however, refrained from further specifying what would or would not fall under postenactment intervention lest it be construed as adding a self-serving provision, Escudero said.

“If we define postenactment—for instance, that we can recommend as long as there is no amount specified, or as long as agencies are not required to accept our recommendations—we will be criticized and would be told that we had a self-serving definition,” he said.

“We’ll let it be resolved in a test case,” he added.

Escudero noted that many members of the House of Representatives were concerned about being able to help constituents because they receive numerous requests for assistance.

To be fair to House members, he said, they are usually the ones who know the problems in their districts because they have the capability to go around and check the conditions of their constituents.

Escudero also noted that there have been many scholars of lawmakers who lost the chance to continue their education because the Commission on Higher Education excluded them from its scholarship program even though they are qualified for assistance under its criteria.

Meanwhile, Escudero also said those who insisted that there was still pork barrel in the proposed 2015 budget were apparently using a different definition of the term.

He said that for some, any item in the budget that is recommended by a lawmaker was pork, even though legislators had the power to recommend projects that answered the needs of their constituencies.

Escudero said the Senate budget bill was guided by the Supreme Court ruling on the pork barrel.

It is not prohibited for lawmakers to recommend projects for funding during the crafting of the budget, as this is preenactment intervention, he said.

Lump sums in the budget are inevitable and are not the problem, he said. Problems arise if the lump sums are subject to discretionary use, Escudero added.

He said he wondered why there were complaints about lump-sum funds, pointing out that the Senate included provisions in the budget bill requiring agencies to submit details of projects to be funded from lump sums before the funds could be released.

Lump sums in the 2015 budget include the allocations for the salary of personnel. Escudero said it would be impractical to list the names of all government employees.

He said the process could allow lawmakers to remove government employees by simply erasing their names from the list.