“The layman wants to know two things about the 2015 budget.  The first question is: In the form of so-called savings, can the President still transfer an appropriation from one agency to another?  The answer is yes,” Santiago said in a privilege speech.

“The second question is: Does the 2015 budget still contain pork barrel, meaning lump-sum funds to be spent at the discretion of the legislators?  The second answer is also yes.”

“In other words, the 2015 budget which contains two dangerous minefields leading to corruption, is not what people expect … It is what administration candidates expect,” said the senator.

Santiago said the pork barrel, which was declared unconstitutional by the Supreme Court, remained intact in the 2015 budget.

Santiago disclosed that last summer, representatives were allegedly asked to submit lists of projects for their districts.

“I understand that the form distributed did not bear any letterhead,” she said.

Santiago did not elaborate but when asked later during a press conference about the said lists, she said she got the information from her sources, who did not provide other details.

Of the amount, she said, P18.369 billion went to the DPWH for “Land Infrastructure Program.” 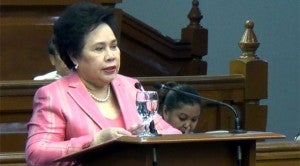 “While legislative lump sums are huge, the presidential lump sum is even bigger, amounting to over P500 billion for 2015 alone,” Santiago said in an earlier statement.
Santiago also described the new definition of savings in the 2015 budget as unconstitutional “for being over-broad and for being vague.”

“In its ordinary sense, the term ‘savings’ means sums of money saved on a regular basis, often by means of economizing,” Santiago said.

“However, the 2015 budget invents its own definition of savings in Sections 67 to 70, particularly Section 68, which provides that savings can be declared at any time for whatever might be considered ‘justifiable reasons,’”  she pointed out.

In the 2011 budget, Santiago said, savings and augmentation were defined as “portions or balances, which are still “available after the cancellation or final discontinuance or abandonment of the work, activity, or purpose for which the appropriation is authorized.”

But under the proposed 2015 budget, savings was now defined as portions or balances from “(a) discontinuance or abandonment of the program, activity, or project (P/A/P) … which would render it not possible for the agency to implement the said P/A/P at any time.”

It was now also defined as “non-commencement of the P/A/P within the first semester of 2015.”

Santiago then recommended that the meaning of savings should be reverted to its original definition.

The Senate, she said, should not approve the budget unless the “offensive” redefinitions are removed.

Congress proposes: Gov’t savings not only at yearend