Gas attendant to get award for foiling robbery, killing 2 suspects 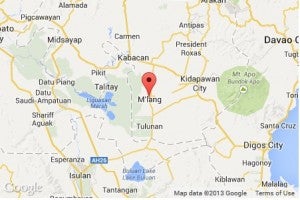 MLANG, North Cotabato, Philippines–An attendant at a Petron mini-gas station in Barangay Pag-asa here has become an instant celebrity when he foiled a robbery on Tuesday and killed two suspects in the process.

Mlang Mayor Joselito Piñol said that the pump boy, whose identity was still being withheld for security reasons, would be feted by the local government for his heroic acts.

“He will be honored not because he killed someone but because he protected the company he works with,” Piñol told Radyo Bida in Kidapawan City on Wednesday.

Police authorities said the gasoline boy was manning the gas station, along with several other co-workers, when he got suspicious of three men on a motorcycle, who arrived about 3 p.m.

Identified only as “Isko” in the police report, the gasoline boy told investigators he did not take his eyes off the three men as they were filling their motorcycle.

Slowly distancing himself from the gas pump, Isko went inside the cashier’s booth and told the one manning it to move away as quietly as possible.

One of the suspects, later identified as Antonio Benitez of Quimco Street in Kidapawan City, then approached the cashier’s booth with a handgun and declared the robbery.

Isko initially did not put any resistance and handed over the P5,000 cash at the drawer to Benitez.

As the suspect boarded the motorcycle with the two others—identified as Jarred Fulgencio of Libertad, Makilala, and Adrian Lalen, also of Makilala—Isko barged out of the cashier’s booth and grabbed Benitez’s handgun.

He fired a shot at Benitez, who died instantly. Isko fired more shots and killed Fulgencio while Lalen was injured.

The injured Lalen was able to drive the motorcycle for about a kilometer before being held at a checkpoint manned by militiamen.

The P5,000 loot was also recovered from him.

Lalen remains in a tightly guarded room at a hospital in Kidapawan City, where he is being treated for a wound he sustained from Isko.

Piñol could not hide his admiration for the pump boy.

“The gas station attendant was unarmed yet he managed to kill two,” one resident added.

Read Next
House seen to OK economic Cha-cha before Christmas break
EDITORS' PICK
Esperon: ‘The master red-tagger is no other than Jose Maria Sison’
Ang init! Dagupan sizzles at 52 degrees Celsius
Get a chance to win 5G smartphones with Smart Signature Plans
Marian Rivera partners with JC to boost public health awareness
Mocking PH protests, China keeps 287 vessels in West Philippine Sea
Tired of your Wi-Fi signal problems at home? Here’s a solution!
MOST READ
Sharon Cuneta flies to LA to take some time off: ‘I need to breathe, collect myself’
Mocking PH protests, China keeps 287 vessels in West Philippine Sea
Trillanes to run for president in 2022 elections
Locsin tells Roque: Drop the subject, leave foreign affairs to me
Don't miss out on the latest news and information.