78,000 free tickets for papal Mass to be given by Archdiocese of Palo | Inquirer News

78,000 free tickets for papal Mass to be given by Archdiocese of Palo 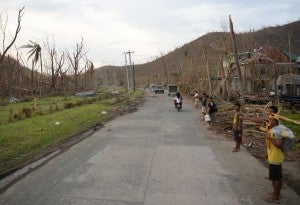 MANILA, Philippines—The Archdiocese of Palo will give free tickets to more than 78,000 people for the papal Mass to be officiated by Pope Francis when he visits Tacloban City in January next year.

Rev. Fr. Cris Militante, media coordinator for the papal visit of the Archdiocese of Palo, said that 1,000 tickets for each of the 78 parishes and mission stations in the archdiocese have been reserved for the papal Mass at the Tacloban Airport.

Militante said that the tickets are not considered as VIP passes and will only serve as a measure to control the number of attendees in the Mass.

The media coordinator also said that even those who will not be able get a ticket could still attend the Mass.

Pope Francis will arrive in the country for a five day papal visit from January 15 to 19. The pope will visit Tacloban City on January 17.