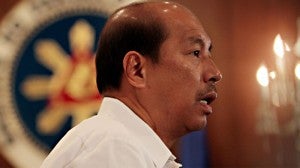 MANILA, Philippines–Budget Secretary Florencio Abad insisted Tuesday that the proposed national budget for next year was free from pork barrel, despite Sen. Miriam Defensor-Santiago’s allegation that it included P37.3 billion in lump-sum appropriations.

Sen. Francis Escudero, for his part, said the crafting of the national budget for 2015 did not herald the return of the pork barrel, but an exercise of the lawmakers’ power of the purse.

Escudero, finance committee chair, defended the inclusion of lawmakers’ proposed projects in the draft of the 2015 budget, saying this was not a violation of the Supreme Court ruling declaring the unconstitutionality of the Priority Development Assistance Fund (PDAF).

Abad claimed that the executive branch preferred not to pool savings, whose definition in the budget bill was also assailed by Santiago.

“Our position is as much as possible, there should be no savings,” Abad told the Inquirer.

“But the reality is that events happen [such as] calamities, lawsuits, nonfilling up of positions, new technologies, etc., that help us generate savings, make us terminate or discontinue projects or induce efficiency,” he said.

“But with all the reforms being introduced, savings, if at all generated, will be a small portion of the budget,” he added.

Asked if the proposed P2.606-trillion national budget included no pork barrel, he replied: “Yes, in the manner that the SC has defined ‘pork’ in [the] ‘Belgica’ [case], which is our reference at this point in time.”

In a privilege speech on Monday, Santiago questioned why members of the House of Representatives had been asked earlier this year to “submit lists of projects they endorsed for their districts.” She described the practice as “pork barrelism.”

Abad admitted that there were such proposals from congressmen.

“We did not ask them [to submit lists]. But they did propose projects for their districts as they always do. And these projects are itemized in the budget,” he said.

Abad said he still had to see details of the alleged lump-sum items in the 2015 budget, noting that the version now under scrutiny at the Senate was the one approved at the House of Representatives.

Despite issues raised by Santiago against the proposed budget, Malacañang on Tuesday said it remained “hopeful” that these would be resolved soon and that the budget bill would be ready for President Aquino’s signature next month.

If a senator sees that there is a part of his province that badly needs a new road, he could propose funding for it under the 2015 budget, especially if the Department of Public Works and Highways had failed to include it among its proposed projects, Escudero said.

“It’s preenactment intervention, not postenactment. It’s well within the purview of what the Supreme Court allows in its definition of pork barrel. And that’s what the House did,” he said.

While there are lump-sum funds in the budget of certain executive departments, these are only temporary because the departments will be required to itemize the projects to be funded before the money is released, he said.

As for Santiago’s warning about the definition of savings, Escudero said the Senate had come up with its own definition that was compliant with the court ruling invalidating most of the activities under the Disbursement Acceleration Program (DAP).

The Senate’s definition of savings does not allow such to be declared anytime, but it allows savings to be declared before the end of the year in certain instances.

For instance, if a project originally costing P10 million was awarded early in the year for only P9 million, there would be

P1 million left. This remaining amount could already be considered savings even before the end of the year, so that this could be used to fund other projects.

If authorities would wait until the end of the year to use this, the cost of materials might already go up.

Savings could also be declared under the Senate definition if a project is discontinued or the agencies no longer have the ability to commence it, but through no fault of theirs.

Programmed appropriations that have not been released due to the fault of the concerned agency could not be considered savings, and would instead have to revert to the general fund.

The Senate version defines savings as “the portions or balances of any released appropriations in the general appropriations act which have not been obligated.”

But Escudero also said he agreed with Santiago that if a project was deemed terminated in one year, it could not be commenced again the following year.

Speaker Feliciano Belmonte Jr. said, “Our budget has no pork, and it is precisely its function to define savings.”

Davao Rep. Isidro Ungab, chair of the House appropriations committee, said it was not true that the House-approved General Appropriations Bill redefined “savings” to mean that it could be declared “at any time for justifiable reasons.”

“We ensured that the definition we crafted is one which complies and [is] in full compliance with our Constitution, existing laws, rules and recent Supreme Court jurisprudence on the matter,” he said in a text message.

Lawmakers’ projects in 2015 budget not ‘pork’—Escudero