60 being screened for lunch with Pope in Palo 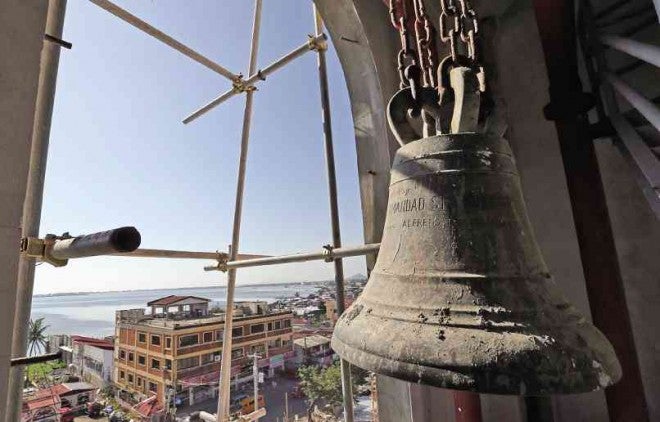 DEVOUTLY Catholic Tacloban City, viewed from the bell tower of the Sto. Niño Church there, and Palo, Leyte province, are preparing for the visit of Pope Francis in January. RAFFY LERMA

PALO, Leyte—The 30 people who will have lunch with Pope Francis here during his visit in January next year will have two things in common—they belong to the poorest of the poor and were hardest hit by Supertyphoon “Yolanda,” the strongest storm ever to hit land.

Church officials involved in preparations for the Pope’s visit here said a national committee was finalizing the list of 30 people who would be allowed to sit at the table with the leader of the Catholic Church.

“The Pope wants to inspire the victims,” said Fr. Amadeo Alvaro, social communications director of the archdiocese of Palo.

Alvaro said Francis wanted to tell the people that “he is here to comfort them.”

Fr. Chris Arthur Militante, information and communications officer of the archdiocese, said at a press conference here that the national committee involved in preparations for the papal visit had asked the archdiocese to submit before the end of the month a list of persons who would have lunch with the Pope.

“We have yet to identify the individuals,” Militante said.

He said at least 60 individuals were being considered but the list was being scrutinized by the archdiocese unit, headed by Fr. Al Chris Badana, who is in charge of selecting whom the Pope will have lunch with.

It was learned that some of the more than 60 individuals submitted their names while the rest were endorsed by their parishes. They are being interviewed by Badana.

Those being interviewed were told not to reveal to anyone that they were on the short list of people who would be invited to lunch with the Pope.

Alvaro said those who would be selected should consider themselves lucky. He said the 30 lunch guests would “represent us, Yolanda survivors who will not have a chance to have lunch with the Holy Father.”

Alvaro said the interview with those on the short list started in January, shortly after the Vatican gave hints that Pope Francis would visit Tacloban City and this town, which both belong to the Palo archdiocese.

Palo is considered the seat of the Catholic Church in Eastern Visayas and is where the Archbishop’s Palace is located. The incumbent archbishop is John Du.