Garin shows up at Senate, greeted with kisses 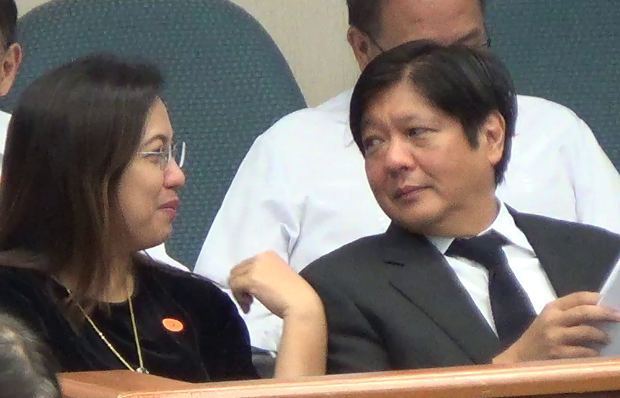 MANILA, Philippines – An “unprotected” acting Health Secretary Janette Garin showed up at the Senate on Monday and got kisses from at least two senators.

Garin has been under fire for visiting Filipino peacekeepers from Ebola-stricken Liberia without any protective gear.

Some senators have expressed apprehension over her coming to this Monday’s hearing on the proposed budget of the Department of Health (DOH).

But when Garin entered the session hall and sat in the VIP gallery, Senator Ferdinand “Bong-Bong” Marcos Jr immediately went over and gave her a kiss on the cheek.

Asked about the Ebola issue against Garin, the senator said he forgot about it before going back to the acting secretary, sitting beside her, and engaging in small talk.

Senator Francis “Chiz” Escudero, chair of the Senate committee on finance, acknowledged Garin off mic but did not approach her.

At the suspension of the session, Senator Paolo Benigno “Bam” Aquino approached Garin, kissed her on the cheek and shook her hands. 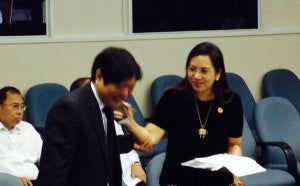 Senator Teofisto Guingona III, chair of the Senate committee on health, also made small talk with Garin from a distance.

Escudero later joined his colleagues with Garin but there were no kisses or handshakes for her.

Senator Vicente “Tito” Sotto III, who earlier raised concern over Garin’s appearance at the hearing, did not approach the secretary.

When he stood on the floor to interpellate on the budget, Sotto explained that he wanted to face the Senate President directly and “not to say that I don’t want to go near the officials of the DOH.”

Sotto’s remark drew laughter from the gallery, including Garin.

Biazon tells Garin to monitor her temperature after Caballo visit