MANILA, Philippines—The Department of Health’s (DOH) P1-billion proposed budget for family planning supplies is hanging in the balance after Senator Vicente “Tito” Sotto III questioned the lack of certification from the Food and Drug Administration (FDA) during Monday’s budget deliberations.

Senator Teofisto Guingona III, chairman of the Senate committee on health, said at least 2.7 million Filipinos would benefit from the proposed budget.

Sotto, a staunch critic of the Reproductive Health Law, asked if the family planning commodities had been certified by the FDA as required by the law. Guingona said the DOH was still awaiting the FDA certification. 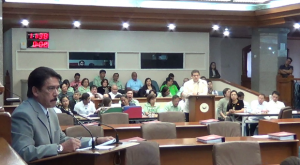 “That’s why even for this year 2014, they have not (made a purchase) yet. They are awaiting the FDA certification,” Guingona said.

“Then why are we putting it in the budget, Mr. President?” Sotto asked, referring to Senate President Franklin Drilon.

“Well, on the presumption that the FDA certification will come out, then at least it’s budgeted,” Guingona answered.

But Sotto pressed for a categorical answer from the DOH.

The session was temporarily suspended and when it resumed, Guingona reiterated that the FDA certification would come out on the first week of December.

“So perhaps we can make that a part of the budget, or part of the records of the Senate for the budget of the DOH . That if we don’t get the certification, we remove the entire budget for those commodities that can’t be certified by the FDA, ” Sotto said.