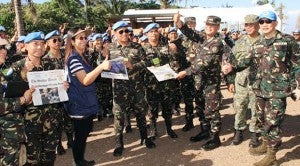 Military and health officials visit Caballo island on Sunday, Nov. 16, where peacekeepers from Liberia are kept for a quarantine. / PHOTO FROM AFP

(They are following the protocols of the WHO and they are doing what is needed in accordance with our aim to ensure that the country is ‘Ebola-free.’)

“These health protocols are being observed in the on-going quarantine process for repatriated Filipino peacekeepers who served in Liberia,” he added.

Acting Health Secretary Janette Garin and Armed Forces of the Philippines (AFP) chief General Gregorio Catapang Jr. received flak after they went to Caballo Island and mingled with the peacekeepers despite the required 21-day quarantine.

The peacekeepers were from Liberia, which has the most number of deaths attributed to the Ebola outbreak.

Catapang said they visited the soldiers to show the public that the soldiers were safe and that there are no cases of Ebola virus in the country.

Coloma said Garin and resource persons from the WHO are ready to shed light on the issue.

He added that the “Armed Forces of the Philippines (AFP) continues to provide communication and recreational facilities to make the peacekeepers’ stay in Caballo Island pleasant and comfortable.”

Coloma insisted that Garin and the others who joined her “continue to act responsibly.”

(Before they reached their positions in the government, they have had several years of experience and their decisions are based on reason and correct standards. Perhaps we should acknowledge that what they did is still considered responsible.)

Almost a week ago, the peacekeepers arrived in the country but were only allowed to see their families from a distance. Although Ebola virus is not an airborne infection, it can be spread through bodily fluids.

One relative complained that they are unable to regularly contact their loved ones.

“We thank the peacekeepers and their families for their cooperation in our determined efforts to endure that the Philippines is ‘Ebola-free,’” Coloma reiterated.