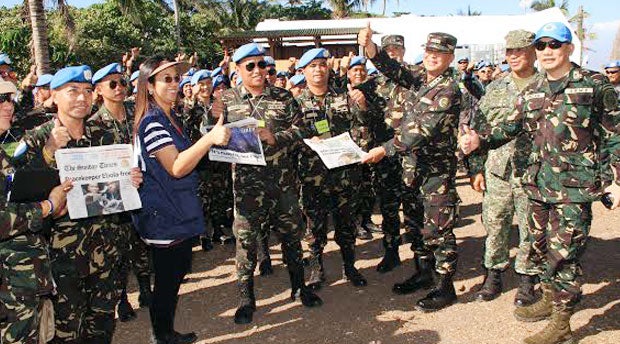 Military and health officials visit Caballo island on Sunday, Nov. 16, where peacekeepers from Liberia are kept for a quarantine. / PHOTO FROM AFP

A day after the visit, the AFP chief even mingled with the crowd including President Benigno Aquino III and Defense Secretary Voltaire Gazmin at the Department of National Defense anniversary at Camp Aguinaldo on Monday.

“[I joined acting Health Secretary Janette Garin] to show our soldiers na safe ang mga sundalo and also to show the entire country that there is nothing to worry about Ebola,” Catapang told reporters.

He said Garin asked him to join her visit to the island to calm public concerns about Ebola.

“She said samahan mo ako, General, kasi there’s a lot of confusion, text messages going around, lots of questions, ano ba talaga ang protocol. So once and for all let’s settle the protocol let’s go and visit the troops without the mask, without the gloves,” Catapang said.

On Sunday, military and health officials led by Catapang and Garin visited the peacekeepers in Caballo Island. They did not shake hands with the peacekeepers but did the elbow bump to greet them. Ebola is not airborne and is spread through body fluids.

One hundred thirty three peacekeepers arrived from Liberia last Wednesday and immediately boarded a ship that brought them to Caballo Island for a 21-day quarantine. One peacekeeper developed a fever and was brought to Research Institute for Tropical Medicine in Alabang. He was diagnosed with malaria but tested negative for Ebola.

The peacekeepers all passed the Ebola screening conducted by the United Nations before their repatriation.

The Ebola virus has killed nearly 5,000 in Western Africa since its outbreak last December.