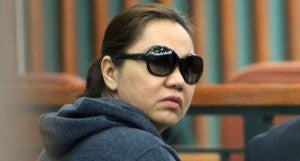 MANILA, Philippines — A whistleblower in the pork barrel scam revealed on Monday that accused mastermind Janet Lim-Napoles had a deputy who was her namesake.

During the bail hearing of Senator Jose “Jinggoy” Estrada for plunder at the Sandiganbayan, Napoles’ bookkeeper Mary Arlene Baltazar testified about a certain “Janet Lim-Napoles Jr.,” who supposedly acted on behalf of Napoles.

Baltazar said Evelyn De Leon, who faces graft over the scam, even introduced herself as Napoles before implementing agencies.

De Leon is out on bail for 16 counts of graft in pork scam cases involving Senators Ramon Revilla Jr. and Juan Ponce Enrile.

The pork barrel scam is the purported diversion of senators’ Priority Development Assistance Funds (PDAF) to ghost projects for kickbacks.

Estrada and Revilla are detained at the Philippine National Police Custodial Center. Enrile, meanwhile, is under hospital detention.

Napoles’ children to be arraigned for graft in pork barrel case