UK police: up to 5 terror plots foiled this year 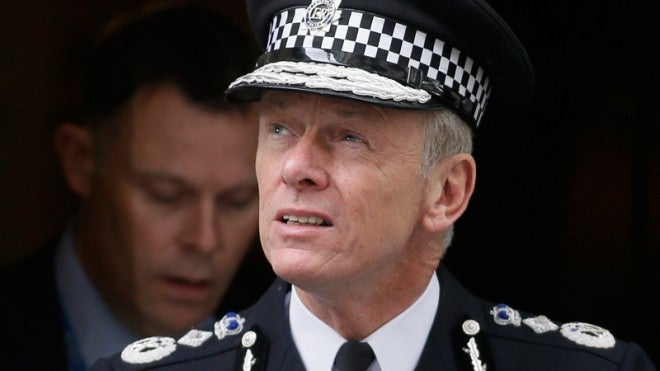 In this Thursday, May 23, 2013 file photo, the Commissioner of the London Metropolitan Police Bernard Hogan-Howe leaves 10 Downing Street in London, following a meeting of Cobra. The head of London’s police force says as many as five terror plots were foiled this year, as he warned of increasing pressure on resources amid the rising threat. Hogan-Howe told the BBC on Sunday, Nov. 23, 2014 that normally security services disrupt one plot annually. However, he says this year alone authorities have disrupted “we think four or five.’’(AP Photo/Alastair Grant, File)

LONDON — The head of London’s police force said Sunday that as many as five terror plots were foiled this year, as he warned of increasing pressure on resources amid the rising threat.

Metropolitan Police Commissioner Bernard Hogan-Howe told the BBC that normally security services disrupt one plot annually. However, he said this year alone authorities have disrupted “we think four or five.”

Police have become increasingly concerned about young people traveling to fight in Syria and becoming radicalized by the Islamic State group. The fear is that they will return and wage attacks at home. Authorities estimate that some 500 British jihadists have traveled to Syria.

Hogan-Howe’s comments come as authorities prepare for a nationwide terrorism awareness campaign in which the police will attempt to build grass-roots support in a bid to prevent attacks. Briefings at some 80 venues such as schools, airports and shopping centers are planned.

The Scotland Yard chief said police are increasingly worried about the possibility of a “lone wolf” attack and that thwarting such attacks is putting pressure on resources because police need to move fast.

“It doesn’t take an awful lot of organizing, doesn’t take too many to conspire together, there’s no real complexity to it,” he said. “What that means is we have got a very short time to interdict, to actually intervene and make sure that these people don’t get away with it. So, that is causing real pressure on us in terms of resources.”

Hogan-Howe’s comments came as Home Secretary Theresa May said she would propose a bill in the House of Commons this week forcing Internet firms to retain data linking Internet Protocol or IP addresses to individual users.

May said the Anti-Terrorism and Security Bill would boost national security.