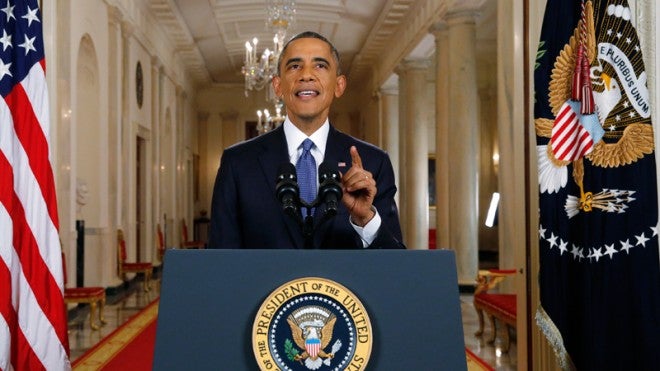 WASHINGTON— President Barack Obama invited a showdown with newly empowered Republicans in Congress, ordering far-reaching changes to the US immigration system that will protect nearly 5 million people from deportation while testing the limits of his presidential powers.

In a televised address Thursday night, Obama described the most sweeping changes to fractured immigration laws in nearly three decades, saying that taking executive actions were a “commonsense” plan consistent with what previous presidents of both parties had done. Immigrants living illegally in the United States would be saved from deportation by receiving work permits; millions more would remain in limbo.

Obama sought to break a stalemate in America’s long-simmering debate over immigration by cutting out Congress, confronting Republicans who swept congressional elections earlier this month and all but ensuring that the contentious debate will carry on into the 2016 presidential campaign.

Furious Republicans, who take full control of Congress in January after capturing the Senate from Democrats, warned that Obama would face serious consequences for what they described as an unconstitutional power grab.

House of Representatives Speaker John Boehner, who has refused to have his Republican members vote on broad immigration legislation passed by the Senate last year, said Obama’s decision to go it alone “cemented his legacy of lawlessness and squandered what little credibility he had left.”

“To those members of Congress who question my authority to make our immigration system work better, or question the wisdom of me acting where Congress has failed, I have one answer: Pass a bill,” Obama said.

Republicans were united in opposing Obama’s move but divided on how to respond. Lawmakers have raised options including lawsuits, a government shutdown and even impeachment. Party leaders are seeking to avoid a government shutdown, say such moves could backfire and anger voters ahead of the next presidential election in two years.

Republicans are in a bind over immigration: the US electorate is rapidly becoming more diverse, especially more Hispanic. Republican leaders have said the party risks its long-term future if it does not act to solve America’s immigration problems. But many in the party’s conservative base oppose any reform that includes a path to citizenship for those who enter the country illegally.

The White House says the president is exercising his executive authority to tackle immigration reform unilaterally, as Republicans Ronald Reagan and George H.W. Bush did before him.

Obama, who had been weighing potential executive actions since early summer, planned to sign a pair of presidential memorandums Friday and travel to Las Vegas for an immigration rally as he appeals for support.

As Obama spoke from the White House, immigration supporters with American flags draped over their shoulders marched on the street outside carrying signs that read, “Gracias, Presidente Obama.”

While Obama’s measures are sweeping in scope, they still leave more than half of the 11 million people living in the US illegally in limbo. The president announced new deportation priorities that would compel law enforcement to focus its efforts on tracking down serious criminals and people who have recently crossed the border, while specifically placing a low priority on those who have been in the US for more than 10 years.

Obama, whose approval ratings have sagged, insisted that his actions did not amount to amnesty.

“Amnesty is the immigration system we have today — millions of people who live here without paying their taxes or playing by the rules, while politicians use the issue to scare people and whip up votes at election time,” he said.

The main beneficiaries of the president’s actions are immigrants who have been in the US illegally for more than five years but whose children are citizens or lawful permanent residents. After passing background checks and paying fees, those individuals can now be granted relief from deportation for three years and get work permits. The administration expects about 4.1 million people to qualify.

Obama is also broadening his 2012 directive that deferred deportation for some young immigrants who entered the country illegally. Obama will expand eligibility to people who arrived in the US as minors before 2010, instead of the current cutoff of 2007, and will lift the requirement that applicants be under 31. The expansion is expected to affect about 300,000 people.

Obama says that although there was a brief spike in unaccompanied children coming across the border over the summer, overall the number of people trying to cross the border illegally is at its lowest level since the 1970s.

Obama also touted his efforts to bolster security at the US-Mexico border and pledged to continue shifting resources to those areas and easing backlogs at immigration courts.

Now that Obama is acting on his own, some on the right are pushing to use must-pass spending legislation to try to stop Obama’s effort. One lawmaker has raised the specter of impeachment.

Obama: US will make immigration ‘more fair and just’