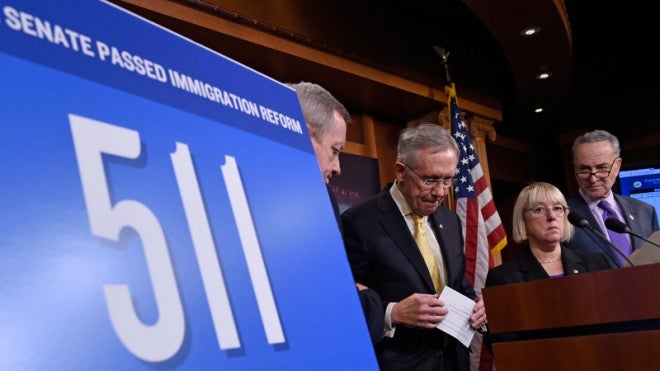 WASHINGTON — After years of wrangling with Congress over how to fix the U.S. immigration system, President Barack Obama is ready to announce his plan to take action alone.

Just how far does he go? Who’s going to be covered? How do Republicans manage their anger?

A guide to what to watch for Thursday night:

WHO WINS AND LOSES?

There are an estimated 11 million immigrants living in the United States illegally, and most of them aren’t going to be covered by Obama’s executive action. The big question is which subsets of immigrants will and won’t be shielded from deportation by the president’s plan — in essence, who wins and who loses?

Up to 5 million people are expected to be covered by the president’s plan, including parents of U.S. citizens and permanent residents who have been in the country for five years. Obama also is expected to loosen eligibility rules for a 2012 program that already protects some young immigrants from deportation. Among the likely losers: Parents of those participating in the young immigrants’ program. They were under consideration, but didn’t make the final cut.

For more than a year, Obama has been prodding Congress to fix the “broken” immigration system, saying his own authority to act was limited by the Constitution.

Republicans are circulating 22 examples of Obama stressing the limits of his authority. Among them, this quotation from February of 2013: “I’m not the emperor of the United States.”

Now, Obama has to do a rhetorical about-face and provide justification for acting alone.

Look for him to point to the actions of past presidents: The White House says Presidents Eisenhower, Kennedy, Johnson, Nixon, Reagan and both Bushes all took unilateral action to make immigration changes by relying on their executive authority.

WHAT’S IN THE FINE PRINT?

For many Americans, their interest in the president’s immigration plan will be limited to a broad-brush idea of how many people are covered. But for millions of immigrants, the smallest details of the plan could well be life-altering.

Immigration advocates and lawyers say their offices already are being flooded with calls from people wondering how they will be affected. Exactly who will get added to the young immigrants’ program? Will immigrant spouses of U.S. citizens be covered? What about protection for farm workers? The minutiae of definitions, deadlines and cut-off dates will be hugely important.

For example, the president will lay out a new ranking of priorities for who gets deported, lowering the likelihood of deportation for parents of U.S. citizens or legal permanent residents who have been in the U.S. for less than five years, and for other immigrants who have been here illegally for more than 10 years.

HOW DO REPUBLICANS VENT?

It’s a given that most Republicans in Congress aren’t going to be happy with the president’s plan, casting it as a case of presidential over-reach and arrogance. But they have vastly different ideas on how best to express their anger.

If their reaction is over the top, that could raise questions about the Republicans’ ability to govern just as they are taking control of the Senate and expanding their majority in the House. It also could alienate Hispanics, who represent a large and growing voting bloc.

Some Republicans have raised the prospect of the immigration dispute resulting in another government shutdown and there even have been mentions of impeachment, but GOP leaders insist it won’t come to that. Others are talking about legal action.

The White House scheduled a rare prime-time presidential address to lay out the president’s plan, hoping to explain directly to the American people both the need for action and the reasons Obama chose to go it alone.

But who will tune in? Univision is delaying the start of the Latin Grammy Awards to carry the president’s brief speech live at 8 p.m. EST. But ABC, NBC, CBS and Fox networks won’t be airing the address. Obama will be competing with the likes of “Grey’s Anatomy,” ”The Big Bang Theory,” ”The Biggest Loser” and “Bones.” CNN, Fox News and MSNBC will carry the president’s speech live.