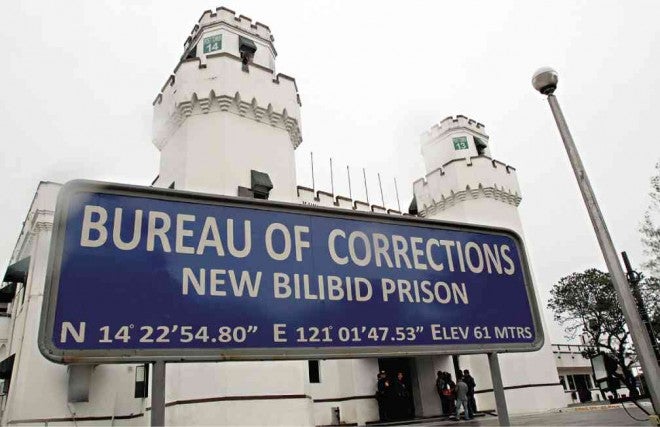 MOVING OUT OF ‘MUNTI’ Expect an entirely new set of coordinates for the national penitentiary. file photo

MANILA, Philippines—After nearly 75 years in Muntinlupa City, the national penitentiary is headed for the countryside.

The formation of a technical working group to work out the details for the transfer of the New Bilibid Prison (NBP) to Nueva Ecija province is underway, according to Bureau of Corrections (BuCor) Director Franklin Jesus Bucayu.

“I can’t estimate when [the procurement process] will be finished but [hopefully, it will be completed] within 2015,” Bucayu told the Inquirer on Tuesday.

The future site of the national penitentiary is a 500-hectare property in Laur town, he added. Construction would take around three years with a budget of P50.18 billion allocated for the project.

Once the transfer was complete, Bucayu said the government was planning to convert the NBP compound into a mixed-use commercial area although there was nothing definite yet.

The new NBP would house 25,000 to 26,000 inmates and conform to the national requirements of a penal facility. The national penitentiary has currently over 20,000 prisoners.

According to Department of Justice (DOJ) and BuCor officials, the 551-hectare NBP compound in Muntinlupa City which opened in 1940 was overcrowded.

Not just for NBP inmates

Bucayu said that aside from accommodating NBP prisoners, the facility may also take in detainees from other heavily congested prisons, adding that the average congestion rate of all BuCor penal facilities was 145 percent.

Earlier, he announced the approval of the transfer by the National Economic and Development Authority (Neda) when members of the House committee on justice conducted an inspection of the NBP.

According to Bucayu, the project would be undertaken through a public-private partnership scheme as a joint project of the DOJ and BuCor.

In 2006, then President Gloria Macapagal-Arroyo issued Executive Order No. 568 authorizing the transfer of the NBP to a 272-hectare reservation in Barangay Cuyambay in Tanay, Rizal, but this was opposed by town officials.

In May 2012, the Aquino government began studying the option of relocating the NBP and the Correctional Institution for Women in Mandaluyong City to Nueva Ecija.

Nueva Ecija Gov. Aurelio Umali said it was about time the national government addressed the problem of the state of prison facilities nationwide.

In a public hearing on the transfer held in Nueva Ecija in July, Justice Undersecretary Francisco Baraan, the DOJ’s supervising official for BuCor and the NBP, said the new facility would follow international standards.

“I saw correctional facilities in Japan, Canada and Australia, and our facilities pale in comparison. The NBP in Muntinlupa City does not look like a prison facility at all and constitutes cruel and degrading punishment [for] prisoners,” he told those present.

At the public hearing held in July, a project timetable showed that the bidding would be done in February next year with the contract signing set for April. Construction would start in October 2015 and was expected to be finished in three years.

Aside from the NBP inmates, some 2,000 prisoners from the Correctional Institution for Women in Mandaluyong City would also be included in the transfer to the new facility, officials said.