The final turn on the winding highway by the mountainside opens up to the view of Boljoon’s century-old stone church on the coast.

Since October, the famous mountain has been pulverized, its trees scraped off.

Bulldozers and backhoes continue to remove chunks of rock and boulders as part of P45.2 million national project intended to prevent future landslides.

The procedure is called “slope benching”.

On Monday, the Boljoon municipal council passed a resolution appealing to the Department of Public Works and Highways (DPWH) to hold off the coastal project in sitio Talisay until a public hearing is called on the matter.

Last Nov. 7, fishermen were alarmed to find rocks and limestone debris being dumped on the shoreline by QM Builders, a contractor of the DPWH.

Some fishing boats were almost trapped by the obstruction.

When Cebu Daily News visited on Monday, a back hoe was operating on a schedule from early morning to 10 p.m.

The municipal council resolution was addressed to District Engineer James Dellosa of the 4th Engineering District of Cebu.

It was passed in mass motion and signed by Vice Mayor Alfredo Awe and Mayor Merlou Derama. 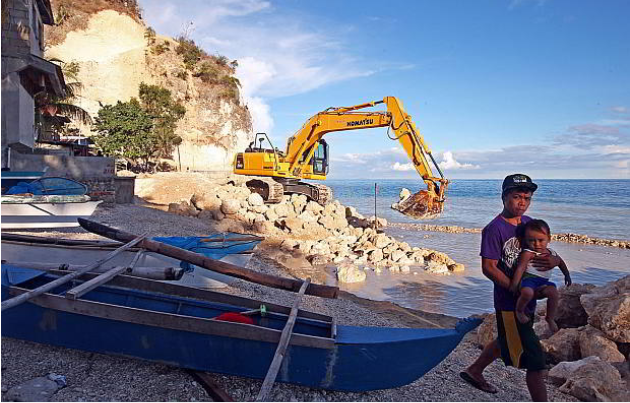 Fisherfolks are worried they might lose their beachfront area, their access to the sea and where young children learn to swim after DPWH dumped limestones to the sea. (CDN PHOTO/ TONEE DESPOJO)

It noted that fisherfolk have sought the help of the Movement for a Livable Cebu (MLC) based in Cebu City to stop the project because no public consultation was made before the actual bulldozing took place.

A protest petition to the mayor and the town council was submitted by the newly formed Lutadabay (Lumad Talisaynon, Daplin sa Baybayon), a group of fishermen of sitio Talisay and Boljoon residents who urged the council to halt “any further construction, excavation, reclamation, dumping of rocks” in the coast pending a “full public inquiry, proper documentation of the project and complete adherence to the Local Government Code.”

MLC members visited the town over the weekend to document the damage and meet with affected fisherfolk.

Ili Mountain, which is part of the town’s history, was declared a natural heritage site by the Boljoon municipal council several years ago.

Boljoon’s stone church under the title of Nuestra Señora del Patrocinio was built in the Spanish colonial period.

It is a national heritage site and the only church in Cebu declared a national cultural treasure by the National Historical Commission.

Residents were told the excavation project was needed to prevent future landslides after the 7.2-magnitude earthquake that hit Cebu and Bohol last year caused a part of Ili Rock mountain to collapse.

The landslide left the road impassable for the whole day of October 15 last year. One motorist was almost killed when boulders fell on the road that day.

But because residents, including Vice Mayor Awe, were worried about losing their natural heritage site and about their safety, they made no objections.

Dioscora Romeo, a 52-year-old housewife who lives with her husband, a fisherman, on the shoreline of sitio Talisay, said they were called to a meeting to the office of Mayor Derama with DPWH officials last September 2 to discuss relocation options to a hinterland barangay to be donated by the Archdiocese of Cebu.

Poblacion barangay captain Alexseus Celis said his constituents were never told about the project or what it was for.

The project was initiated by the DPWH after the strong earthquake that hit Bohol and Cebu on Oct. 15, 2013.

After the quake, a huge area of Boljoon’s famous Ili Mountain collapsed, which rendered the national road impassable, Engr. Marlon Marollano, chief of the DPWH planning and design section, wrote in his report dated Nov. 3, 2014.

He said it took the DPWH at least 13 hours to clear the area. An investigation of the mountain showed “several huge cracks” and that there was a danger the mountain “will collapse any time.”

The agency then secured P43, 674, 900 released under Calamity Funds for 2014 for “slope benching/ widening” to eliminate the cracked section.

Work started on Aug. 4, 2014, in coordination with the Boljoon local government. He said they asked about the lot owners next to the national road, and after getting mutual verbal consent with the lot owner of the first affected lot, in coordination with Mayor Derama, the contractor started “at their own risk to construct an access road going uphill of the mountain.”

“Considering the safety of the motorists traveling along the route, this office could no longer wait for the imminent danger to happen and urgently pursued the excavation not to go beyond 60 meters from the highest sea tide level easement of the foreshore area and road-right-of-way limit of the national road.” 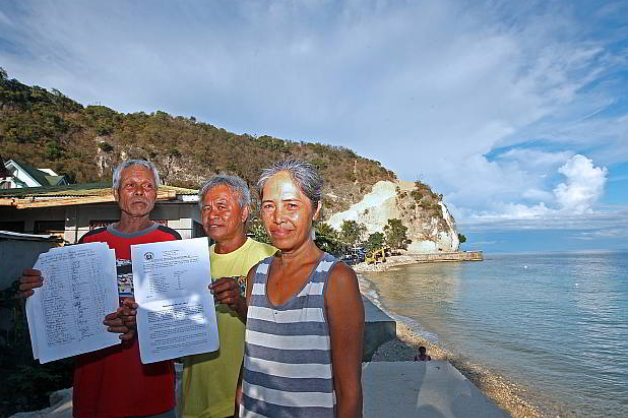 Fishermen of sitio Talisay in Boljoon show the signatures gathered for their protest petition urging the town council to stop the DPWH project which has dumped limestone debris on the shore, disturbing their livelihood. (CDN PHOTO/ TONEE DESPOJO)

Marollano said P43.9 million was allocated for the first phase of the Rehabilitation/ Reconstruction and Reclamation of Shore Protection Structure, while P45.2 million was for Widening of Critical Landslide Section along Natalio Bacalso Avenue.

Marollano said projects that use the calamity fund don’t need to undergo public consultation and don’t require an Environment Compliance Certificate from the Department of Environment and Natural Resources (DENR).

A certificate of non-coverage from DENR was issued to DPWH on September 16, 2014, for the benching project.

Mayor Derama said he didn’t know the full details of the DPWH District Office but did not stop the project believing it was done for the good of Boljoon residents.

(If a project is given to us, we accept it. It’s good that this project is done at no cost to the town. Something happened before. Our congressman was the one who looked for a way to undertake the project).

But since residents and fisherfolk have already made a stand, he asked the DPWH in a meeting on Monday to put up signages about the project and to brief residents about why it’s needed.

Municipal councilor Marvin Ian Niere said the only lapse of the DPWH was in the lack of information.

Mayor Derama said he believes the project would protect the town from possible storm surges as what happened during typhoon Pablo and during the earthquake last year.

Marollano of DPWH said the reclamation project will be used for a park and an alternative processional route for the town.

But residents said they can do without a park, but they need their beachfront back so they can fish again.

Half of Central Visayas LGUs unprepared for disasters

Use ‘purok’ system in disaster response

Amid James-Nadine cheating rumors, Frankie Pangilinan wonders: ‘Why is it never the man being attacked?’