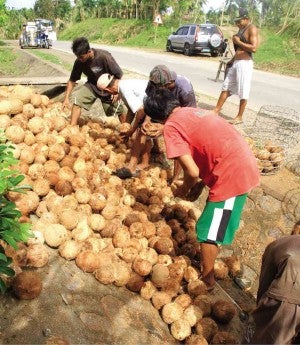 MANILA, Philippines—A Malacañang official said Tuesday that it is willing to talk with 71 coconut farmers from Coco Farmers Movement who will arrive in Manila on Wednesday from Mindanao after staging a 1,772 kilometer protest march to demand the distribution of P71-billion coco levy funds.

In a press briefing, Communications Secretary Herminio Coloma Jr. said that the Aquino administration prioritizes accountability in the usage of public funds.

(The welfare of our citizens and the accountability of the government to public funds like coco levy are our basic principles in the said issue [farmers’ protest]. We recognize their right to express their demands in a civil manner. We are willing to talk to them to understand their demands and to address their concerns. )

In a 2012 decision, the Supreme Court ruled that 24 percent or P71 billion coco levy funds are public funds and should be awarded to more than 3.5 million coconut farmers.

Meanwhile, youth groups from Ateneo have expressed their support for the coconut farmers’ protest.

The groups also asserted that the coconut trust fund will “back programs that will develop the coconut industry, increase the capacities of farmers in producing coconut products other than copra, and encourage farmers’ participation through village-level cooperatives.”