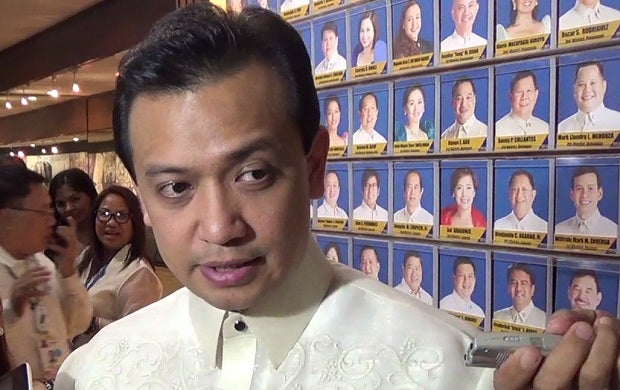 MANILA, Philippines–Disputing insinuations that he was neglecting his legislative work, Sen. Antonio Trillanes IV on Monday said he had submitted a list of proposed laws that would improve government procurement and lessen the risk of corruption.

Trillanes said he got the idea for the proposals from the hearings being conducted by a Senate blue ribbon subcommittee on alleged irregularities in Makati when Vice President Jejomar Binay was mayor of the city.

Binay’s camp said on Sunday that Trillanes should go back to his legislative job if he had moved on from his role as renegade soldier in the attempt to overthrow the Arroyo administration, known as the Peninsula Manila Hotel siege of 2007.

Binay and Trillanes are at odds over the inquiry, which has been the venue for charges that Binay pocketed kickbacks from Makati infrastructure projects and amassed ill-gotten wealth, including a 350-hectare agricultural farm in Rosario town, Batangas province.

Trillanes said that as a result of the hearings, he pushed for the adoption of certain measures to curb corruption.

“Contrary to the allegations that the investigation on the Makati car park building is being conducted in aid of demolition and not in aid of legislation, I have submitted a list of proposed measures, which we came up with in light of the findings of this investigation,” Trillanes said in a statement.

Among the proposals, Trillanes said, are the abolition of the resident auditor system in the national government and in local governments, and the adoption of a raffle system for a regular rotation of auditors to ensure their independence and to avoid collusion and overfamiliarization with those they are auditing for the Department of Public Works and Highways (DPWH) and the Commission on Audit (COA).

Trillanes said he had also proposed that procuring agencies adopt the Davis Langdon and Seah Construction Cost Handbook or other acceptable industry standards as standard reference and basis for agency estimates for government infrastructure projects.

He said he had also proposed the inclusion of the actual measurement of the total floor area of a government building project as part of the requirements for a technical audit by the COA.

Trillanes said he had also proposed the video recording of all government procurement procedures and activities, which is already embodied in a bill he filed last year.

Trillanes said he had the most number of bills that he principally sponsored and that he ranked third in number of bills, resolutions and committee reports filed.