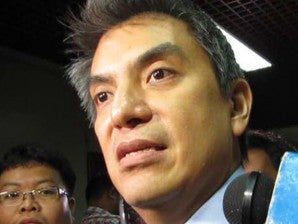 Tiangco, interim president of the opposition United Nationalist Alliance (UNA) headed by Binay, noted that Trillanes called for the termination of a Senate blue ribbon committee inquiry into allegations of overpricing and in the construction of the Iloilo Convention Center (ICC), a pet project of Drilon, after only one hearing because of the failure of the lone whistle-blower, Manuel Mejorada, to submit documentary evidence.

In contrast, Tiangco said, Trillanes has allowed the whistle-blowers in the Senate blue ribbon subcommittee inquiry into allegations of overpricing in the construction of Makati City Hall Building II involving Binay to continue on to a 12th hearing even after the witnesses’ “bungling” of their testimony.

“Trillanes is playing blind because he wants to save Drilon. He (Trillanes) might have forgotten that (witness) Renato Bondal was forced to admit that he only made a guess on the price of the cake (for senior residents of Makati City). (Former Makati Vice Mayor) Ernesto Mercado has been caught lying several times, including his claim that he was the one who rode the helicopter [that] took a video of Sunchamp farms in Rosario, Batangas,” Tiangco said.

Trillanes urged Sen. Teofisto Guingona III, blue ribbon committee chair, not to conduct another hearing on the ICC after Mejorada admitted during his testimony last Thursday that he used Wikipedia as a source of information.

Tiangco pointed out that Bondal also used Wikipedia for his claims on the allegedly overpriced Makati building.

“Why were they laughing when Mejorada cited Wikipedia but they accepted it as the only truth when Bondal cited the same (source)?” Tiangco said.

“The senators are way too soft on Drilon but too hard on the whistle-blower,” he said.