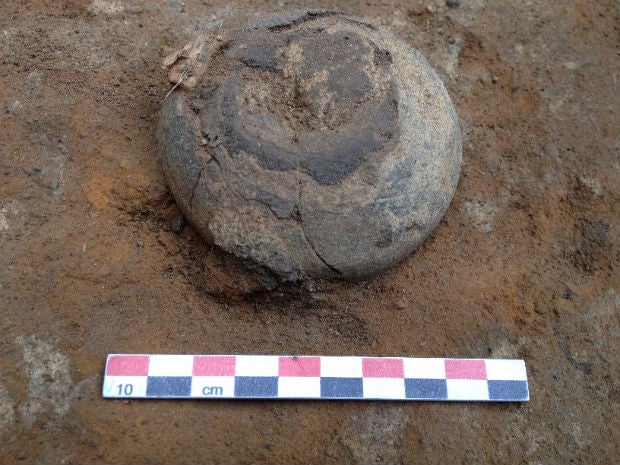 In this photo released by the superintendence for Archaeological Heritage of Pompeii Tuesday, Oct. 28, 2014, a small, overcooked, bowl which was found along with many others in a potter’s laboratory immediately out the walls of the ancient town of Pompeii, destroyed by the volcanic eruption of Mount Vesuvius in A.D. 79. AP

ROME — Archaeologists picking through latrines, sewers, cesspits and trash dumps at Pompeii and Herculaneum have found tantalizing clues to an apparently varied diet there before the eruption of Mount Vesuvius destroyed those Roman cities in 79 A.D.

Much of what residents didn’t digest or left on their plates went down into latrine holes, became remnants in cesspits built up over the centuries or was thrown away in local dumps. At a three-day conference ending Friday in Rome, archaeologists discussed their discoveries, including gnawed-on fish bones and goose eggshells that were possibly ancient delicacies for the elite.

“We just have small glimpses of the environment, but some are quite curious,” Mark Robinson, a professor of environmental archaeology at Oxford University Museum of Natural History, told the conference.

Here’s some of the curiosities the experts discussed:

Much of what the inhabitants ate was local. Archaeologists noted that some types of mollusk shells found in the sewers of Herculaneum came from the ancient town’s beach. Notable exceptions include grain, which was likely imported from Egypt; dates from the Middle East and northern Africa; and pepper spice from India. Although flour left no traces across such a long time, grain weevils apparently survived the milling process, ending up in a Herculaneum sewer that served a block of shops and home.

Today’s Romans are big on pork — pork slices known as porchetta are a popular filling for lunchtime sandwiches. Trash dumps from roughly the 1st century B.C. and the early 1st century A.D. in the Pompeii neighborhood of Porta Stabia yielded an abundance of pig bones, a sure sign that pork was popular then, noted Michael MacKinnon from the University of Winnipeg. Particularly tasty mollusks known as telline were popular on ancient tables; now telline as an ingredient for a seafood sauce is a much sought-after item on present-day Roman menus.

A CHICKEN IN EVERY POT? 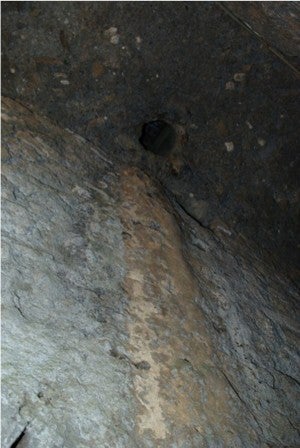 This undated photo provided by Mark Robinson, environmental archeologist at Oxford University Museum of Natural History, shows a latrine entry shaft into a sewer with calcium phosphate build-up on the side. AP

That’s not clear but lots of chicken eggs were consumed, judging by the numerous pieces of eggshell found. Erica Rowan, an archaeologist at the University of Exeter who worked on the Herculaneum sewer, also reported finding two fragments of goose egg shell, possibly the remnants of a meal consumed by the elite. But for the most part, it appeared that both rich and not-so-rich Romans in these cities ate much the same food, especially fish.

HORS D’OEUVRES FOR THE DEITIES

Being buried for centuries in the sewers and cesspits helped preserve food traces — Vesuvius’ eruption also carbonized some food for posterity. Bite-sized, carbonized, cake-like breads — “nibbles for the gods” is how Robinson referred to them — were discovered at a disused kiln in Pompeii. Pieces of votive cups were also found, prompting archaeologists to view the nibbles as possible offerings to ancient Roman deities.