Senate decides to suspend probes to focus on national budget 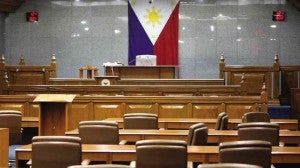 MANILA, Philippines – When the Senate begins plenary deliberations on Wednesday on the national budget for 2015, all committee hearings are expected to grind to a halt.

But before this, there will be another hearing on Tuesday of the three-member Senate blue ribbon subcommittee on alleged corruption in Makati City when Vice President Jejomar Binay was mayor there, centering this time on claims the science high school was overpriced, just like the Makati City Hall Building II.

After that, the subcommittee’s next hearing is expected to be held after the Senate has approved the 2015 budget, according to Sen. Antonio Trillanes IV who has vowed to pursue the inquiry until April.

Under the Senate rules, no committee hearings are allowed while the plenary is tackling the budget.

The Senate will formally receive the House of Representatives’ version of the 2015 General Appropriations Act today. It will be sponsored on the floor on Tuesday afternoon, according to Sen. Francis Escudero, chair of the Senate finance committee.

The last day of plenary deliberations is on Nov. 25, after which the Senate is expected to vote on the 2015 budget bill.

Escudero earlier said that for committee hearings to be held while the plenary has been deliberating on the budget, an exemption must be sought from the rules committee.

But Senate Majority Leader Alan Peter Cayetano said last week that he did not think an exemption would be given for the subcommittee hearings on Makati City issues.

If the subcommittee is allowed to hold hearings during budget deliberations, other committees must be given the same privilege as well.

“So as the chair of the committee on rules, I will say that either we allow all or allow no one [to hold a hearing]. And I think what would prevail is not to allow committee hearings, because the budget is very important for the country,” Cayetano said.

But he also said senators could ask questions on Makati issues when the budget of concerned agencies are taken up. For instance, he said, they could ask the Department of Agrarian Reform about its probe of the vast Batangas estate being linked to Binay.

Trillanes said over radio station dzBB on Sunday that if the Binay camp insisted that the construction of the P1.3-billion Makati Science High School was aboveboard, it should attest to this before the Senate subcommittee.

“If the camp of Vice President Binay thinks they can prove it is not overpriced, then they should show up at the hearing so that they could put on record their positions,” Trillanes said.