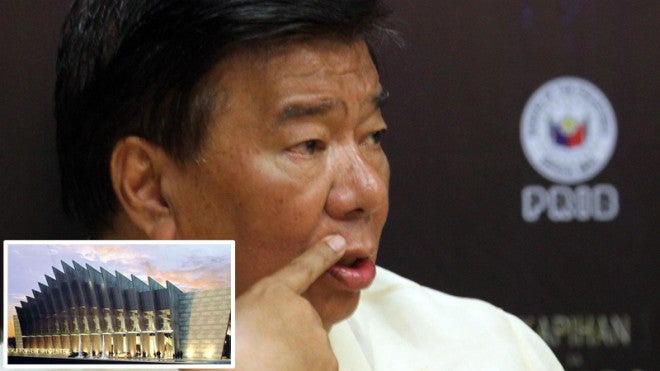 MANILA, Philippines — A high-ranking official of the Liberal Party said Sunday that continuing the Senate blue committee probe on the alleged overpriced Iloilo Convention Center (ICC) will be a “real waste of time and money” as the former Iloilo official who lodged a plunder charge against Senate President Franklin Drilon presented claims based on Wikipedia.

Liberal Party secretary general and Samar Representative Mel Senen Sarmiento said that the allegations of overpricing hurled by Manuel Mejorada Jr. are “nothing but baseless innuendos.”

“The only basis of Mejorada in claiming that there was overpricing on the construction of the ICC is the Wikipedia and flawed mathematical formula. It would be a real waste of time and money for the Senate to continue investigating this kind of an allegation,” Sarmiento said in a statement.
Sarmiento added that Mejorada’s claim that Drilon conspired with Public Works Secretary Rogelio Singson and Tourism Secretary Ramon Jimenez to increase the cost of the ICC are rooted on “mere assumptions and faulty calculations.”

Not the same with Makati building probe

The lawmaker from Samar said that the Senate investigation on the ICC cannot be compared to the blue ribbon subcommittee probe on alleged overpriced Makati City Hall Building 2, as the allegations made by former Makati vice mayor Ernest Mercado are backed up by witnesses and documentary evidence.

“Even at the beginning of the Senate probe, the allegations made against Vice President [Jejomar] Binay and his family are based on testimonies, documents that even include pictures and the expert opinion of third-part experts. The ICC case on the other hand was only based on the say-so of a disgruntled former provincial government employee who can only present the Wikipedia as an evidence,” Sarmiento added.

He added that the Senate should continue its probe on the reportedly overpriced Makati building.

“Clearly, the Senate must continue the probe on the allegations of corruption in Makati but there’s no reason to do the same in the case of the ICC,” he added.
The Senate blue ribbon committee on Thursday conducted its first hearing on the ICC. During the said hearing, Mejorada said that the first phase of construction of the ICC was overpriced. However, he then admitted that he has no evidence to prove his claims against Drilon, saying that he relied on online sources like Wikipedia and “whispers.”

After ‘dud’ of a testimony, Pimentel rethinks Drilon probe