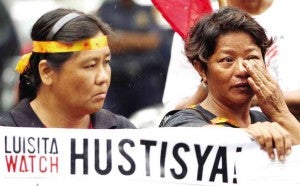 VIOLETA Basilio (right) weeps during the protest action for the victims of the 2004 Hacienda Luisita Massacre where several sugar workers, including her only son Jhaivie, died during the bloody dispersal. LYN RILLON/INQUIRER FILE PHOTO

CITY OF SAN FERNANDO, Philippines — About 500 people on Sunday gathered at Central Azucarera de Tarlac (CAT) in Tarlac City, a property of the family of President Aquino and the site of a riot 10 years ago between government forces and striking workers, to demand justice for the seven men killed in that bloody event.

“Hacienda Luisita massacre” is how Florida Sibayan and her group, Alyansa ng mga Manggagawang Bukid sa Asyenda Luisita (Ambala), refer to the event that transpired around 3 p.m. on Nov. 16, 2004.

Police and the military retook CAT’s Gate 1 on the order of then Labor Secretary Patricia Sto. Tomas after the Department of Labor and Employment assumed jurisdiction over the joint strike of members of United Luisita Workers Union from CAT Labor Union and Ambala that began on Nov. 6.

The strikers, however, resisted, saying talks were ongoing with the management of both CAT and Hacienda Luisita Inc. (HLI).

Sunday’s commemoration opened with an ecumenical service by leaders of the Catholic, Protestant and Aglipayan churches.

The families of the victims came, either showing photographs of their slain loved ones or sharing the pain of losing them.

Sibayan, Ambala chair, said she did not expect the government to immediately jail those responsible for the deaths of Jessie Valdez, Adriano Caballero Jr., Jaime Fastidio, Jesus Laza, Juancho Sanchez, Jhaivie Basilio and Jhune David, with President Aquino in power.

Aquino was representing the second district of Tarlac province when the riot broke out in 2004.

Sibayan, in a telephone interview on Sunday, said Aquino and his relatives were among those who should be held accountable for the deaths of the striking workers.

“We were unarmed. We were violently dispersed as we demanded the application of genuine agrarian reform in Hacienda Luisita. Workers in CAT wanted fair wages,” she said.

Lawyer Antonio Ligon, spokesperson of HLI, said the killings had been investigated and the results showed no fault on the part of HLI or government officials at the time.

“As far as I know, President Aquino is not even an officer or employee of HLI. So it’s baseless and unfair to put the blame on him,” Ligon said on Sunday.

In August, Ambala and families of the victims filed a petition asking the Office of the Ombudsman to reopen the Luisita massacre case. The petition, however, was denied in October.

Sibayan said only the Laza and Valdez families received their 6,600-square-meter farm lot from the 4,500 hectares the Supreme Court had ordered HLI to distribute in 2012 under the government’s agrarian reform program. This was because their fathers had worked at the sugar estate since 1989, when the stock distribution plan, the first form of agrarian reform there, took effect.