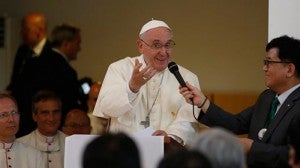 MANILA, Philippines–Pope Francis will deliver his speeches in English during his papal visit to the Philippines from January 15 to 19.

In a press conference on Friday, Pasig Bishop Mylo Hubert Vergara, chairman of the Episcopal Commission on Social Communications of the Catholic Bishops’ Conference of the Philippines, said the Pope will deliver his speeches in English, even though the Pope, whose real name is Jorge Mario Bergoglio with roots in Argentina, is not well-versed in the language.

But Pope Francis will celebrate Mass in Latin, the bishop said.

Church and government officials were mum about details of ensuring the security of the pontiff, who is known for his spontaneous acts of mingling with the faithful.

Executive Secretary Paquito Ochoa deflected questions on the security details, saying this is meant precisely to ensure the safety of the Pope.

“If I may suggest to everybody, let’s not be too detailed precisely because we want to make sure the Pope is safe. Ninety-five percent of its preparations is about his security,” Ochoa said.

He also downplayed fears about possible attacks by Islamic extremist groups like the Abu Sayyaf.

Manila Archbishop Luis Antonio Cardinal Tagle even refused to answer questions on where he would stay in Manila, where three of the five-day papal visit will be held.

“For sure, may matutulugan naman siya,” Tagle said, eliciting laughter from reporters.

Tagle added that though the Pope will mostly be in Manila, this does not diminish the significance of his visit to victims of “Yolanda” in Leyte.

“At least one day is to be devoted in Tacloban and Palo…. The symbolism matters a lot. The personal encounters with the people, even if he will spend two full days in Manila, would also include people who are suffering, who have experienced other forms of disasters in life,” Tagle said.

“He really admires the faith and resilience of the survivors. He will come to bring the message of solidarity and hope, and I’m quite certain he would want to imbibe and to be edified and inspired by the faith of the simple people,” he added.

Pope Francis will be the first Pope to visit Eastern Visayas, which was ravaged by Super Typhoon “Yolanda” in November 2013. The typhoon, said to be the world’s strongest to hit land, killed some 6,300 people with 1,060 still missing.

During his visit to Leyte, the Pope will celebrate an open-air Mass at the Tacloban airport. Then he will proceed to the archbishop’s residence to dine with the poor. The Pontiff will also bless the Pope Francis Center for the Poor—a project financed by the Vatican for the care of the elderly, the orphans and the less privileged.

Pope Francis’ arrival will be the fourth papal visit to the Philippines since 1970.