Metro Manila after a 7.2 magnitude quake

In a scenario conceived by the Philippine Institute of Volcanology and Seismology, there will be chaos:

Panic will cause stampede. Several electric and communication lines, trees will be tilted or toppled. There will be a disruption of power and communication. Bridges will collapse. Walls will sustain cracks. Glass windows will be broken. Airports will brought to a halt. Trains will stop operations due to damaged railway tracks. Fire will break out in several areas. Sewer pipes will be broken. Businesses will be at a standstill.

Is Metro Manila ready for such a scenario?

“That question is always asked. Are we ready? Ready is always something we want to achieve at a hundred percent,” Phivolcs Director Renato Solidum said on Friday. 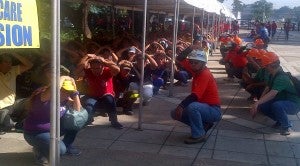 “When we say we are ready we can talk about people’s preparedness. It is essentially influenced by people’s awareness,” Solidum said. “I think we are aware and we are doing many preparedness activities since 2004.”

Sirens rang at 9 a.m., signalling that the strong quake struck.

The drill scenario is derived from the results of the Metro Manila Earthquake Impact Reduction Study Conducted in 2004 and the GMMA READY Project in 2014.

Camp Aguinaldo and Veterans Memorial Medical Center served as the incident command post during the drill. They made assessments and medical teams administered patient assessments. Some workers of the Quezon City Hall were brought to Quezon City Circle. A mock fire scenario was also set up in Brgy. Pansol where firefigthers responded.

In Brgy. Socorro, there was a made-up looting incident, and police responded with “maximum tolerance.”

“I think for saving lives we are really improving ourselves. But the key to earthquake preparedness is to making sure houses and structures are earthquake resistant or resilient,” Solidum said.

The acivity is in anticipation of the movement of West Valley Fault in Marikina and the Manila trench where a tsunami is likely to occur.

“Based on studies, the West Valley Fault has moved four times in the last 1,400 years. There is an interval of movement every 400 to 600 years. The fault last moved in 1658, that’s roughly 356 years ago.  It could happen later or within our generation and we have no reason not to be ready,” Solidum said.

If the West Valley Fault moves, nearby provinces like Bulacan, Rizal , Cavite and Laguna will also be affected.

He added that the activity was conducted in order to test contingency plans based on “disaster imagination scenarios.”

Metro Manila has a population of about 11 million as of 2010 according to the National Statistics Office.