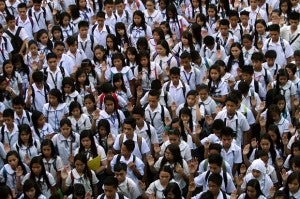 Students during flag ceremony at the Batasan Hills National High School, Quezon City on the first day of classes. It is one of the public high schools with the largest student population at 12,239 enrollees. It is more than last year, according to its Principal Diego Amit, with students transferring from private schools due to tuition fee increases. LYN RILLON/INQUIRER FILE PHOTO

Vicente K. Fabella, president of Jose Rizal University (JRU), told the monthly general assembly of the Foundation for Upgrading the Standard of Education (FUSE), that an estimated 800,000 students are expected to transfer to private educational institutions when Senior High School of government’s K to 12 program gets fully implemented in school year 2016-2017.

The additional two years in high school would serve as specialization period for students in vocational skills, music, the arts or sports, he said.

Under government’s voucher system, Fabella said, incoming students in senior high would be provided financial assistance to enable them to enroll in eligible private learning institutions or non-DepEd public schools on a full or partial tuition subsidy. The Department of Education (DepEd) is planning to provide a subsidy of P12,000 to P20,000 to each student.

He explained that grantees of E-GASTPE, or the Expanded Government Assistance to Students and Teachers in Private Education, who are incoming senior HS students in private schools for school years 2016-2017 and 2017-2018, would be automatically entitled to the TESTF voucher (Tertiary Education Sector Transition Fund). GASTPE, or RA 8545, aims to decongest public secondary schools by “contracting” the excess capacities of private high schools through the provision of subsidies for students who, otherwise, would have enrolled in public high schools.

Fabella, who is also vice president of the Philippine Association of Colleges and Universities (PACU) for the National Capital Region, said more than 30,000 teachers from private higher education institutions (HEIs) would be adversely affected during the transition period of the K-12 program.

The Commission on Higher Education and Department of Labor and Employment, as proposed in a bill pending before the House of Representatives, would be the lead agencies in the implementation of TESTF. Some P10B would be earmarked for qualified students in senior HS and retained qualified teaching and non-teaching personnel in HEIs, while P24B for retrenched teaching and non-teaching personnel.

Read Next
Iloilo, Guimaras teachers learn storytelling techniques
EDITORS' PICK
97% of COVID-19 beds at PGH currently occupied
Gear up and get ready to play with Yamaha Mio Gear
Acer starts the year off strong with the Aspire Vero National Geographic Edition
Japan brings back virus restrictions over Omicron surge
Over 3 Million worth of prizes to be won at Smart Padala’s SENDali Manalo Promo!
Uproar over no vax, no ride policy: Maybe it’s time for gov’t to say sorry—Bello
MOST READ
1Sambayan names 7 aspirants in its 2022 Senate lineup
Emma Stone calls Andrew Garfield a ‘jerk’ after he ‘lied’ about his ‘Spider-Man: No Way Home’ appearance
Guevarra to Acosta: Obey rules on unvaccinated
PH to import 60,000 tons of fish to cover shortage
Don't miss out on the latest news and information.