Tiangco: Binay decision to back out of debate last minute 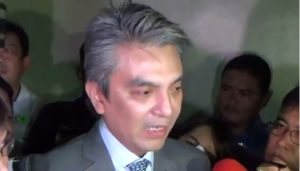 MANILA, Philippines—It was a last-minute decision.

That was how United Nationalist Alliance (UNA) interim president and Navotas Representative Toby Tiangco described the decision of Vice President Jejomar Binay to back out of his public debate with Senator Antonio Trillanes IV.

Tiangco said he was surprised with the decision of Binay.

He said he and some UNA members met with Binay on Monday to convince him to back out of the debate but the vice president was determined to push through with it.

“It was an emotional meeting. But there was no indication it will not push through,” Tiangco said in an interview over radio Inquirer 990AM, citing he was surprised with Binay’s decision.

He said Binay told them that he was hurt with the allegations against him most especially that his family was already being dragged in the issue.

He said Binay believed the debate was the proper venue to air his side and answer all the corruption allegations hurled against him since the Senate Blue Ribbon subcommittee hearing has already “prejudged” him.

But on Tuesday morning, Binay backed out of the debate with Trillanes.

He made the announcement right after he participated in a boodle fight with the members of the Philippine Navy at the Bonifacio Naval Station in Taguig City to celebrate his 72nd birthday.

In an ambush interview, the vice president was asked to explain his decision to cancel the debate.

Tiangco said he and other UNA members were surprised as they only knew the decision the time Binay made his pronouncement.

Although Binay’s decision to pull out of the debate was final, Tiangco said the vice president would submit himself to any investigation by the Ombudsman and the Sandiganbayan.

The rift between Binay and Trillanes started when the senator filed the resolution that started the subcommittee probe of the alleged overpricing of the Makati City Hall Building II and other alleged anomalies in the city when Binay was its mayor.

Binay has repeatedly declined the senate invitation to appear before the Blue Ribbon subcommittee hearing, citing that the inquiry was not in aid of legislation and that the senators have already prejudged him.

Read Next
CNN to end broadcasting in Russia
EDITORS' PICK
New Year, New Rediscoveries
Acer Philippines welcomes you to its first flagship store
Is your company a growth champion? Stand up and be recognized!
4 senators want military, cops off UP campuses
PUP accord with DND also faces termination
Joe Biden sworn in as 46th U.S. president, urges end to ‘uncivil war’
MOST READ
Trump’s parting gifts to Biden: Roaring stocks, a weaker dollar, tons of debt
Biden says Trump wrote him ‘very generous letter’
A shade at Roque? Vice asserts being a comedian, not a clown
Dacera case: Sinas orders relief of Makati’s top cop, medicolegal officer
Don't miss out on the latest news and information.