US Catholic bishops try to calm anxiety over pope 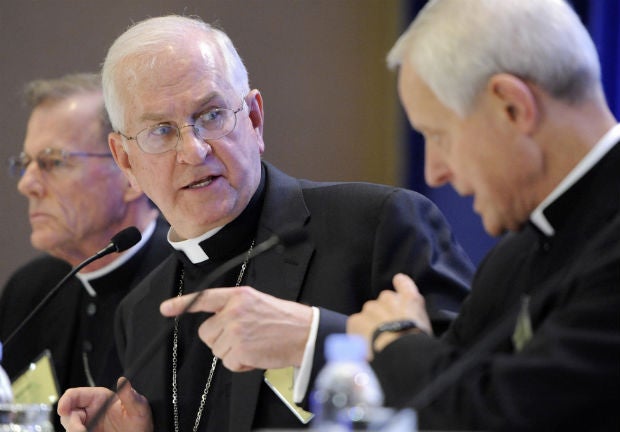 BALTIMORE — America’s Catholic bishops came together Monday to project an image of unity, after a Vatican meeting on the family unleashed an uproar over the direction of the church.

Last month’s gathering in Rome on more compassionately ministering to families featured open debate — alarming many traditional Catholics, who argued it would undermine public understanding of church teaching. Pope Francis encouraged a free exchange of ideas at the assembly, or synod, in contrast to previous years, when such events were tightly scripted.

At a meeting Monday in Baltimore, Archbishop Joseph Kurtz, president of the U.S. Conference of Catholic Bishops, signaled there was no conflict between a gentler approach and upholding church orthodoxy. Kurtz cited his home visits to parishioners, where he wouldn’t give them “a list of rules to follow firsthand,” but would instead “spend time with them trying to appreciate the good that I saw in their hearts,” before inviting them to follow Christ.

“Such an approach isn’t in opposition to church teachings. It’s an affirmation of them,” said Kurtz, who attended the Vatican gathering.

Cardinal Donald Wuerl of Washington, who also participated in the Vatican gathering, emphasized that last month’s meeting was only the start of a discussion before a larger gathering on the family next year, where bishops will more concretely advise the pope on developing any new church practices. New York Cardinal Timothy Dolan said the divisiveness he read in media accounts did not reflect the collegial discussion inside the event.

“It was a synod of consensus,” Dolan said. The pope, he said, has a God-given gift “for attentive listening.”

The bishops made the remarks at their fourth national meeting since Francis was elected. While many Catholics have praised Francis’ new emphasis on mercy over the culture wars, many theological conservatives have said Francis is failing to carry out his duty as defender of the faith. Some U.S. bishops have resisted turning their focus away from gay marriage, abortion and other contentious social issues to take up Francis’ focus on the poor, immigrants and those who feel unwelcome in the church.

The papal ambassador to Washington, Archbishop Carlo Vigano, said in a wide-ranging speech bishops “must not be afraid to work with our Holy Father.”

The public sessions at the U.S. bishops’ meeting are focused on religious liberty, upholding marriage between a man and a woman, and moral issues in health care. In his speech, Kurtz said the bishops would continue to fight the Obama administration over the birth control coverage requirement in the Affordable Care Act, his signature health law. The administration has made several changes to accommodate the bishops’ concerns, but church leaders say the White House hasn’t gone far enough. Dozens of dioceses and Catholic nonprofits have sued over the mandate.

At the Rome gathering, tensions arose when Vatican officials released a mid-meeting report that contained language more welcoming to gays and people in civil heterosexual unions. The language was not included in the final report.

The Rev. Tom Rosica, a Vatican press office official for English-language media, attended the American bishops’ assembly. He said an in interview that Catholic church leaders and lay people, as well as those outside the church, are reacting strongly to the Vatican meeting because they aren’t accustomed to addressing issues the way Francis advocates.

“The pope made it clear doctrine would remain untouched,” Rosica said.

He said Francis “is traveling at high altitude,” above the backlash to his leadership, as he tries to revive discussion and move the church forward.