Palace: Up to Binay to resign 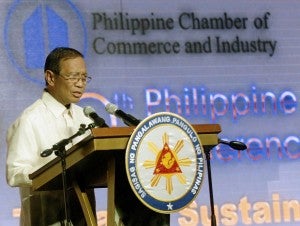 Despite administration allies calling on President Benigno Aquino III to boot out Binay from the Cabinet, the decision will still come from the vice president.

Based on Communications Secretary Herminio Coloma Jr.’s statement on Tuesday, it is unlikely that Aquino will force the opposition leader to resign as head of the Housing and Urban Development Coordinating Council (HUDCC) and Presidential Adviser on OFW (overseas Filipino workers) concerns.

This is despite the president’s remark that Binay is free to leave the Cabinet if he feels they are on the wrong path.

“The president has spoken about the vice president’s work as member of the Cabinet and only Vice President Binay can answer that question,” Coloma said in response to calls for Binay to resign out of “delicadeza.”

He added that only Binay can respond to accusations that he refuses to leave the Cabinet because he wants to utilize government resources for his presidential campaign for 2016.

In an ambush interview in Laguna on Monday, Aquino recognized Binay’s efforts in the housing sector but pointed out his inability to present solutions to his complaints. He said it is the obligation of all Cabinet members to contribute ideas on how to improve the work of the government.

Hours later, Binay released a statement saying he has high respects for Aquino and will “continue to be a team player.”

“That is his response and I think the vice president is entitled to give his response,” he merely said.