Aquino hits back at Bello: ‘He has so many complaints’ | Inquirer News 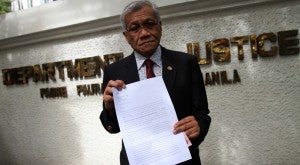 He was reacting to a Philippine Daily Inquirer article quoting the administration ally who complained about the President’s choice of Cabinet members.

Bello had said that the Aquino administration was “losing the moral high ground on the anti-corruption issue” by not going after its own allies.

“He has so many complaints. I suggest that if he thinks only his views are correct, he should run for president in 2016 and if he’s now the President, he could run the country according to his vision,” Aquino said. “For now, I think I am doing what is right and necessary.”

In the Inquirer article about Aquino’s scrutiny of his Cabinet members, Bello said the President should get rid of at least five appointed officials.

He complained that the Disbursement Acceleration Program (DAP) fund allocated by Abad’s wife, Representative Henedina Abad, for Batanes, was too much. He said P177 million, the sixth largest DAP allocation, was “outrageous” for the country’s “smallest district with the smallest population and smallest number of registered voters.”

He said it was actually Bello who was thinking like a “trapo” or traditional politician.

“It’s like he’s saying, let’s not put funds in areas that are poor, especially if there are only a few voters. Isn’t that an opinion of a trapo?” Aquino said.

“What will happen to the most depressed and poorest provinces if that is our basis of allocating funds? It should not be based on the number of votes that can be received by the politician but based on the population’s needs,” he explained.