The former senator and health secretary was once considered the country’s most popular doctor for his sense of humor and many believed he learned the best jokes at his high school.

Two buildings in the school were named after Flavier, which the “poorest senator” helped build using his Countrywide Development Fund. 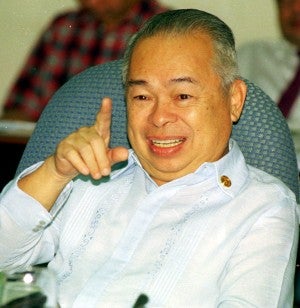 Elma Donaal, BCNHS principal, called Flavier the “pride and one of the pillars of the city.”

“He was an honest, humble and down-to-earth senator and doctor,” Donaal said.

Flavier, a member of the high school’s Class 1952, was regarded as one of its most successful alumni for rising to “a notable position in the field of politics,” according to the school’s official website.

Donaal said Flavier was instrumental in helping fund the four-story multipurpose building that houses a computer room, classrooms, a cafeteria and a library.

Flavier allotted P27 million as initial fund to construct the building, which also benefited from aid supplied by then Baguio Rep. and now Mayor Mauricio Domogan and the Japanese government.

The late senator also funded a three-story building that has nine classrooms at the BCNHS annex in Barangay San Vicente here.

“Senator Flavier left a lasting legacy not only by helping construct school buildings but by being who and what he was, which inspired thousands of graduates, teachers and school employees,” Donaal said.

MPHS and BCHS were the former names of BCNHS.

“A true Baguio boy, member of MPHS-BCHS Class 1952 and the school’s most outstanding alumnus… condolence to the bereaved family and our prayers for strength at this time… Godspeed, Sir!” said Paul Fianza, a BCNHS graduate. Desiree Caluza, Inquirer Northern Luzon