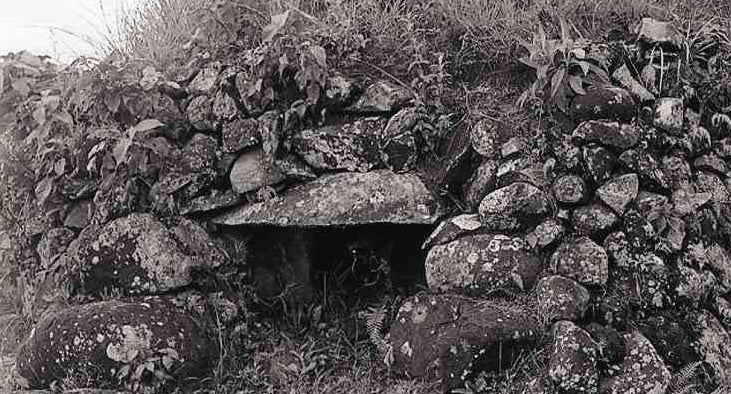 RESEARCHERS say the stonewall method of building the Ifugao rice terraces had been used in constructing the burial mound apfo’or in Mayoyao town. ROLAND RABANG/CONTRIBUTOR

MAYOYAO, Ifugao – On a hill known as Ottong, overlooking the eastern villages of Bongan and Banhal in Mayoyao town, Ifugao province, sits a mound of rocks neatly piled and assembled near the edge of a cliff.

Locals call it “apfo-or,” or “finatto,” a tomb built specifically for a family. In mainstream culture, this might be the equivalent of a family burial plot.

Leah Enkiwe-Abayao, assistant professor of history at the University of the Philippines Baguio, says people of Mayoyao follow a kin-based burial system.

Born and raised in Mayoyao, Abayao says one way to trace a person’s bloodline is to identify his or her relationship with ancestors buried in an apfo-or.

Of the few stone monuments that remain, Abayao has studied 10 of them for her doctoral dissertation. The Ifugaos, she says, share common cultural traits, including burial practices. However, her inquiry into the death rites of other towns led to the conclusion that the apfo-or might be a practice unique only to Mayoyao.

She says building the apfo-or is laborious. An examination of the type of stone used to build the apfo-or at Ottong shows that this is found in and along river beds. At the foot of Ottong flows a river running through Mayoyao’s southern villages.

Abayao says rocks for the apfo-or were obtained from this river. How the rocks were brought from the river to the top of the hill is a testament to the community’s sense of cooperation.

“It is possible that the transport of rocks was done by way of a long line of people that stretches from the riverbed up to the hill,” Abayao says.

She describes the specific rock type as granite, comparable to the ones used to build the rice terraces. In fact, she says, the method of building the apfo-or is similar to how the Ifugao rice terraces were carved out of mountainsides.

“Stonewalling is evident, and it is grouted with clay from the inside to prevent water seepage,” Abayao says.

The underlying principle in the Ifugao death practice is the belief in the ancestors’ presence. With “chin nun-apoh” (ancestors), Ifugaos believe that death is a mere transformation “from life on earth to a life with the ancestors,” Abayao says.

This belief dictates burial practices, including interment where the dead is buried within the household. While unique, the apfo-or still represents the Ifugaos’ shared cultural traits because its interior is similar to the inside of an Ifugao hut, says Abayao.

Within the apfo-or are two parallel elevated platforms, which in an Ifugao hut, serve as the family’s sleeping area.

Ifugaos acknowledge death as a part of the circle of life. The apfo-or is built long before a person dies, Abayao says. The labor invested in its construction might be the reason only Mayoyao residents practice this, she adds.

The use of the apfo-or declined “due to Christian-influenced practices,” Abayao says. This decline, she says, led to the abandonment of the apfo-or, some of which were soon looted for bronze and other artifacts.

But at the peak of its practice, the apfo-or, or burial rite, was elaborate, structured and long-drawn. The death of a person requires that ritual animals are butchered as the dead is wrapped in a blanket called “empat.”