Poe: No plans to run for president in ’16 | Inquirer News
Close
menu
search

Poe: No plans to run for president in ’16 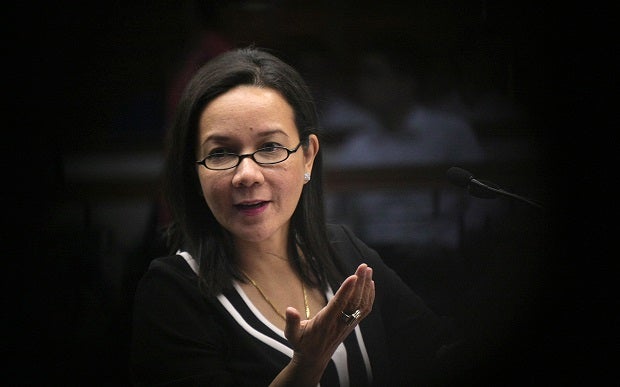 MANILA, Philippines–People should not read too much into her use of her father’s altanghap campaign line in her privilege speech on hunger, Sen. Grace Poe said on Tuesday, as she continued to be skittish when the topic of 2016 was brought up.

Poe insisted that she had no intention to run in the country’s next presidential election. “No plans at all,” she told reporters on Tuesday.

She said her use of altanghap, shorthand for almusal, tanghalian, hapunan (breakfast, lunch, dinner) should not be an issue.

In her privilege speech on Monday on the growing number of hungry Filipinos, Poe said that as her late father Fernando Poe Jr. had noted, altanghap remained the problem of ordinary citizens.

A political analyst made much of the term, saying it was possible that Poe was positioning herself for 2016.

The late Poe used the term altanghap when he ran for president in 2004. He said the main problem of Filipinos was almusal, tanghalian, hapunan.

“Don’t make an issue of altanghap. I just used it because it sounded good and it is hard to forget,” Senator Poe said.

She said that she used the line in 2013 when she ran for senator and that she was just fulfilling her promise, which was why she was pushing to address the problem. The lunch program for children is close to her heart, she said.

“As I said, fighting corruption is crucial, infrastructure is vital, Bangsamoro is necessary, but let’s not forget the most important, capital, our people, especially the children,” she said.

In Lucena City, Vice President Jejomar Binay shrugged off the opinion of a political analyst that Poe was presenting herself as an alternative presidential candidate in 2016.

Binay maintained that all qualified Filipinos could seek the presidency.

“The people will be the judge,” the Vice President told the Inquirer in an interview after gracing the affair of Quezon senior citizens at the Quezon Convention Center in Lucena on Tuesday.

On Monday, Ramon Casiple, executive director of independent Institute for Political and Electoral Reform, said Poe was possibly positioning herself as another presidential candidate in the 2016 polls.

Casiple said Poe could be a strong contender considering the results of the 2013 senatorial election that she topped, her performance in the Senate and the latest ratings of potential presidential candidates, particularly the decline in the ratings of Binay who nevertheless still leads potential rivals in the 2016 elections.

But former House Minority Leader Danilo Suarez and close political ally of former President Gloria Macapagal-Arroyo said Binay was an unbeatable candidate in 2016 even with Poe in the race.

“No amount of character assassination and political mudslinging can bring him down. He is a sure winner in 2016,” Suarez said.

He said the Suarez political clan in Quezon would campaign for Binay in 2016. His youngest son, David, is the Quezon governor. His wife, Aleta, is a member of the House of Representatives for the province’s third district.

Binay is the first among politicians to declare that he will run for president in 2016.

Suarez said Arroyo’s political allies in Lakas-CMD had yet to decide on whom to support in 2016.

Binay said the prevalent hunger and poverty among millions of Filipinos were not the fault of the Aquino administration.

Binay made the comment when the Inquirer asked for his reaction over the report that 15 million children remain hungry or malnourished and a total of 12.1 million Filipino families considered themselves poor.

The Vice President said the figures were “factual”and “one problem that we have to face.”

Poe questioned comments about her being an alternative to Binay, who declared early on that he would seek the presidency in 2016.

“Why alternative? It’s not as if he would no longer run,” she said.

When reporters pressed her about calls for her to run in 2016, she appeared reluctant to discuss the matter.

She said she was surprised that her privilege speech on hunger, following the observance of World Food Day on Oct. 16, was given media attention, when speeches in the Senate plenary were usually ignored.

Senators Pia and Sonny, too

Poe noted that she was not the only senator who was pushing for programs to address the welfare of severely wasted children.

Senators Pia Cayetano and Sonny Angara have similar bills to feed schoolchildren, she pointed out.

Poe, in her privilege speech, lamented that the number of hungry Filipinos continued to grow even as the country’s economy continued to soar.

Poe said that the 15 million she cited from the Food and Agriculture Organization referred to hungry Filipinos, not necessarily children.

But she added that it did not really matter because in her own statistics, there were some 6 million malnourished children.

Going by the Social Weather Stations figure of 9.3 families who rated themselves as food-poor, the number of hungry children may increase given the average of three children per family, but the number may also be less.

“But let’s not forget. One million, five, or 10, it’s our responsibility, the government, to be able to uplift (them). There’s no excuse especially now when supposedly we are on our way up, economically,” she said.

Grace Poe: I have no plans to seek presidency