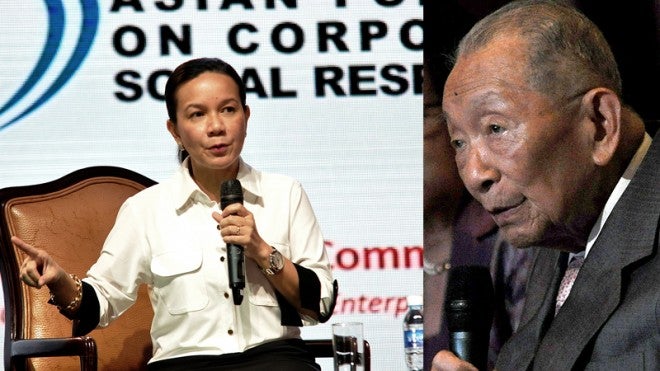 ‘WASH’ FOR GRACE Washington SyCip (right), founder of auditing firm SGV & Co., wants Sen. Grace Poe to run for President in 2016. SyCip was one of the earliest supporters of the senator’s father, Fernando Poe Jr., when he ran for President in 2004. PHOTOS BY RICHARD A. REYES

MANILA, Philippines–A man who knows how to count, one of the earliest supporters of Fernando Poe Jr. when he ran for President in 2004 but was believed to have lost in the counting, is interested in seeing his daughter Sen. Grace Poe run for the same office.

Washington SyCip, founder of accounting firm SGV & Co., on Tuesday asked Poe at the Asian Forum on Corporate Social Responsibility in a hotel in Makati City about her running for President.

Poe, however, told SyCip that she still had no intention of seeking higher office. But she was nevertheless grateful to have his trust.

“Of course, especially coming from Washington SyCip, it’s an honor to have his trust and for him to consider me as somebody who can probably give more by serving in higher office,” Poe said when asked in the Senate about SyCip’s statement.

She said she “really admires” SyCip, 93.

“He’s a captain of the industry. More importantly, he inspires many also because of his contributions and positivism,” she added.

The senator also said SyCip had connections to her grandfather.

Her grandfather, Fernando Poe Sr., was one of SGV’s first clients, she said. And SyCip had been quick to support her father’s bid for the presidency in 2004.

“Washington SyCip was one of the first supporters of FPJ when he ran for President, so maybe he has a soft spot. That’s all,” she said.

Still, she was not convinced about running for President.

“I told him I have no plans. Right now, I’m barely over a year in office and I have yet a lot to prove. But again, it’s an honor especially coming from him,” she said.

Poe said she did not want to make a big deal about the matter, when asked by the Inquirer about SyCip’s question to her.

Though she has not declared any plan to run for President in 2016, Poe has been ranking second in surveys on voters’ preference for the country’s next Chief Executive.

She ranks behind Vice President Jejomar Binay, who has early on announced his plan to run for higher office.

Poe was the top-ranked candidate during the 2013 senatorial election. It was the first time she ran for public office.

Poe has been known for championing the freedom of information bill, which was already passed in the Senate but is still floundering in the House of Representatives.

She has also spoken out against electoral fraud, recalling the fate of her father who ran and lost to Gloria Macapagal-Arroyo in 2004.

The 2004 presidential election, however, was allegedly marred by cheating as shown by the “Hello Garci” scandal in which Arroyo was recorded asking an election official about her a million vote lead in the polls.