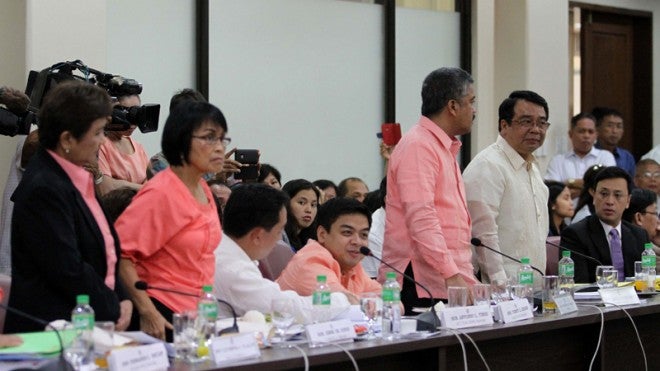 MANILA, Philippines–The rector of San Sebastian Cathedral in Bacolod City said the House justice committee’s decision to junk all three impeachment complaints against President Aquino for lack of substance was to be expected in a chamber dominated by the President’s allies.

“We cannot expect them to rise above the level of pork. The pork has hardened their hearts, making them insensitive to people’s sentiments. A sad day indeed,” Fr. Felix Pasquin said.

Retired Archbishop Oscar Cruz was not surprised by the turn of events.

“If Congress approved the impeachment complaints as sufficient in form and substance that would have been very strange,” Cruz said.

Malacañang washed its hands of the House justice committee’s decision to junk all three impeachment complaints.

“The President and the government did not use any influence,” Communications Secretary Herminio Coloma told reporters shortly after the House committee, which is dominated by administration allies, dismissed the complaints.

In a separate statement, deputy presidential spokesperson Abigail Valte said the committee had made the decision “after a thorough review of the allegations in terms of its substance.”

“We take note that the process took place with transparency, not just according to the rules, but to give the proponents every opportunity to make their case,” she said.

Members of the Makabayan bloc wanted to unseat Aquino in connection with his Disbursement Acceleration Program and the new defense deal he had signed with the United States.

The National Union of People’s Lawyers (NUPL), which helped the organizations and individuals prepare the impeachment complaint against Aquino, scored his congressional allies’ application of their “tyranny of numbers” to “massacre the search for truth and accountability.”

“We are totally and absolutely surprised, baffled and bewildered that impeachment complaints were junked hastily. Members of the ruling party that dominantly compose the House committee of justice said they are all honorable and representatives of the people,” NUPL secretary general Edre Olalia said in a statement.

“What the ruling party did was basically all form and practically no substance. Impeachment hearings were all for show. Tyranny of numbers in impeachment proves democratic institutions and processes are mere formalities. It reeks of patronage politics,” he added.

Olalia said the groups behind the impeachment would continue to pursue cases against Aquino at a future date.

“This partisan junking of substantial impeachment complaints does not get Mr. Aquino off the hook. He remains accountable. He will have his time,” he said.

Administration lawmakers were indifferent to the swift dismissal of the impeachment complaints.

“Maybe (impeachment never really had a chance) but the fact remains they did not get a single vote, majority or minority, outside of their 7-member group, 4 of whom cast the negative votes,” Speaker Feliciano Belmonte Jr. said in a text message.

“At the committee level, they could not even get 10-percent support, which is a far cry from the 33 percent of the House membership needed to initiate impeachment proceedings,” Fariñas said. The House has 286 members.

Negros Occidental Gov. Alfredo Marañon Jr. said the impeachment complaints against the President had no basis.

Cruz said some congressmen and senators could be influenced by the President.

“It is rather clear that the impeachment cases are more symbolic than real because how could an impeachment case, whether it is subscribed or endorsed by this and that congressman, ever prosper when most of them (legislators) are beneficiaries of the Aquino administration?” he said.

“I know that it’s a numbers game. So it has basically no hope, no chance unless more and more people will go against Malacañang,” he said.

Activist archbishop not surprised by junking of impeach raps vs Aquino