Erice rides on joke about being a Binay look-alike

MANILA, Philippines—Caloocan Representative Edgar Erice decided to ride on the joke about him being a look-alike of Vice President Jejomar Binay.

In a press conference on Tuesday, the Liberal Party official was asked to comment on United Nationalist Alliance (UNA) interim president Toby Tiangco’s snide remarks that Erice was only looking at the mirror when he accused UNA of masterminding the “Oplan Maligno.”

Under the plan, Erice said UNA wanted to divert the public’s attention from the alleged corruption in Makati that implicated the Vice President by paying for political advertisements, while at the same time criticizing the administration’s efforts in railway breakdowns, power, among others.

He said he does not mind being compared to Binay as long as his claims about Oplan Maligno remains true. 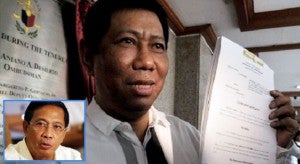 “Maligno” is Filipino for evil spirit. Binay’s camp protested when ABS-CBN’s Korina Sanchez, the wife of Interior Secretary Manuel Roxas II, used the term to refer to the Vice President in August 2012.

Binay’s party had said the Senate probe on the alleged overpricing of the Makati parking building during the term of Binay was part of “Oplan Nognog.”

Erice denied that LP is behind Oplan Nognog.

He said that the party would not make a reference to a “lovable” comic character whose skin is charcoal black to make Binay a pitiful presidential candidate in 2016.

“They hatched Oplan Nognog to make him endearing to the Filipino masses. I won’t call Binay Nognog because it would make him a poor presidential candidate,” Erice said in Filipino.