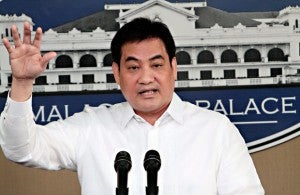 MANILA, Philippines–Why is Vice President Jejomar Binay attacking the administration when he is a member of President Aquino’s official family?

President Aquino’s spokesman, Edwin Lacierda, threw that question at the Vice President when he was asked the same thing in the face of Binay’s criticism of the Aquino administration.

Lacierda said Binay’s camp should clarify who the Vice President was attacking in particular when he ranted about rampant criminality, looming power shortages and worsening conditions at Metro Manila’s train systems last week—basically governance issues that raised questions about the Aquino administration’s competence.

“Since the subject of the newspaper story was the issue between Vice President Binay and the legislators he was referring to, we have nothing more to add,” Coloma said then, referring to an Inquirer report.

In an interview on ANC television last week, Binay accused Interior Secretary Mar Roxas and Senate President Franklin Drilon of orchestrating an alleged campaign of vilification to derail the Vice President’s bid for the presidency in the 2016 elections.

Roxas, a potential standard-bearer of the Liberal Party in the balloting, and Drilon have denied the charge.

Binay’s United Nationalist Alliance (UNA) also has suggested that the Liberal Party is using in the smear campaign P3.8 billion from Malacañang’s pork barrel funds, called the Disbursement Acceleration Program, which the Commission on Audit said had been unaccounted for.

Binay is being investigated by the Senate blue ribbon subcommittee in connection with the alleged overprice of Makati City Hall Building II and unexplained wealth while he was Makati mayor.

Lacierda is identified with Roxas’ Balay group in the Aquino administration; Coloma belongs to the Samar faction that supports Binay.

Malacañang on Monday distanced itself from the back-and-forth between Binay’s camp, mainly Navotas Rep. Toby Tiangco, and Caloocan Rep. Edgar Erice of the Liberal Party.

Quoting the President, Lacierda described as “24 independent republics” the members of the Senate where Binay and his family are now the subject of a corruption investigation.

“We are focused on governance. We would appreciate their help in governance but insofar as the Senate investigation is concerned, for the Senate allies, administration allies, that’s part of their job in aid of legislation,” Lacierda said. “So do we say, ‘Stop … doing the investigation’? The President said, ‘These are independent republics.’”

Administration allies like Erice earlier criticized Binay for remaining with the President’s Cabinet even though the Vice President headed UNA, his main political vehicle in the 2016 elections.

UNA’s senators belong to the minority in the upper chamber, but its members in the House of Representatives, except for Tiangco, have aligned themselves with the majority.

Palace: Binay’s feud is with lawmakers, not us