Palace: Binay’s feud is with lawmakers, not us | Inquirer News
Close
menu
search

Palace: Binay’s feud is with lawmakers, not us 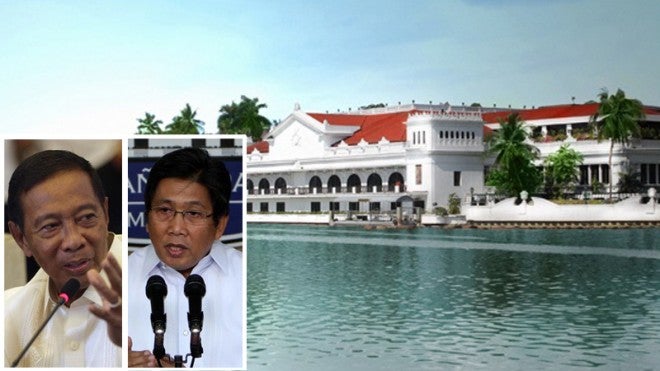 In defending himself against allegations of corruption, Vice President Jejomar Binay (left inset) is attacking administration lawmakers, not President Aquino, Malacañang spokesman Herminio Coloma (right), who is identified with the Binay faction in the Palace, said on Sunday. INQUIRER PHOTOS/MALACAñANG PHOTO FROM FACEBOOK ACCOUNT

Communications Secretary Herminio Coloma, who is identified with the Binay faction in the Palace, made the distinction clear, but did not comment when asked whether the Vice President should finally show his “true colors.”

Binay, who has long disclosed his plan to run for President in 2016, is under Senate investigation for alleged corruption when he was mayor of Makati City.

He has denied the charges, saying they are politically motivated, and called the Senate blue ribbon subcommittee that is looking into the allegations a “kangaroo court.”

President Aquino’s allies have criticized him for choosing to stay with the administration but attacking it in defending himself against the corruption charges.

Binay’s latest offensive came on Saturday at a Lions Club gathering at the Manila Hotel where, in a speech, he criticized Aquino’s allies in the Senate for wasting time by investigating “recycled” charges against him instead of dealing with the country’s pressing problems.

“There is a power crisis, the rising prices of oil and other commodities, the rampant crime plaguing the country, the hellish traffic jams, unsafe MRT and LRT, the recurrent flooding and the wrath of nature that we must all prepare for,” he said.

“But instead of giving all their time and thoughts to achieve solutions to these problems, they chose to advance their own interests by destroying my name and those of my loved ones,” he said.

Apparently referring to the Inquirer report, Coloma said Binay was not speaking against the President but against “administration allies in the Senate who have mounted an inquiry into alleged corruption in Makati during his term as Makati mayor.”

“Since the subject of the newspaper story was the issue between Vice President Binay and the legislators he was referring to, we have nothing more to add,” Coloma said on state-run radio.

The Senate blue ribbon subcommittee has invited Binay to the inquiry to air his side on the accusations against him, but he has rejected the invitation and his camp has said he preferred to bring the issue “directly to the people.”

Instead of facing the charges against him in the Senate, Binay has also challenged Sen. Antonio Trillanes IV, who had filed the resolution seeking an inquiry into the allegations against the Vice President, to a debate.

Trillanes accepted the challenge and the Kapisanan ng mga Brodkaster ng Pilipinas is now arranging the debate with its member stations.

The Palace welcomed the debate, saying it was part of a “healthy democracy.”

“Let the discussions that will give our people additional knowledge take place,” Coloma said.

Reacting to Binay’s speech to the members of the Lions Club District 301-D2 on Saturday night, Trillanes on Sunday said the Vice President was trying to divert public attention from the inquiry into the mounting charges against him.

“The attacks are just attempts of VP Binay to misdirect or divert public attention from corruption allegations against him. While the issues may be valid, the timing is suspect,” Trillanes said in a text message.

For Sen. Francis Escudero, going on such an offensive still does not explain the issues hounding Binay.

Speaking on dzBB radio, Escudero said Binay was only human and likely hurting from the allegations coming from former Makati officials. He may have been advised that the best defense is a good offense, Escudero said.

“The problem with such a defense is the issue is still not explained, the controversy is not cleared up and the many questions remain unanswered,” Escudero said.

Among the charges against Binay is overpricing in the construction of the P2.28-billion Makati City Hall Building II, taking kickbacks from municipal infrastructure projects, and using dummies to conceal his ownership of an 8,877-square-meter real estate property in Comembo village in Makati and a 350-hectare farm in Rosario town, Batangas province.

Binay and his press officers insist the charges are aimed at derailing his plan to run for the presidency in the 2016 elections.

Styling himself as a servant of the poor, Binay has also called the Senate inquiry a plot by the rich to prevent a man from low beginnings like him from attaining the highest office in the land.

Escudero reiterated his support for the Senate move to invite Binay to respond to the allegations against him, saying it was the legislature’s obligation to give him the chance to defend himself.

The blue ribbon committee has accepted the Binay camp’s condition that the invitation should come from the mother committee and not from the subcommittee conducting the inquiry.

The chair of the committee, Sen. Teofisto Guingona III, has said he would send an invitation to Binay.

If Binay thinks the allegations will not affect him, he can ignore them, Escudero said. But if he believes the charges affect his numbers, he should study what he should do next, he added.

As to whether Binay should leave the Aquino Cabinet, Escudero said the decision should be left to the Vice President or to the President. At this point, he said, both seem to want to continue working together.

Trillanes, who earlier said Binay should resign from the Cabinet if he disagreed with the administration’s policies, said he would not rule out the possibility that the Vice President, after his speech on Saturday, would try to appease Aquino by saying the President wasn’t his target.

“VP Binay is truly a politician of the worst kind,” Trillanes said.

He also said he believed Binay had plans to go on a “massive propaganda campaign” employing media and public relations operations to respond to the allegations against him.

Pretending to be poor

In an interview on dzBB, Trillanes criticized Binay for trying to paint his crisis as an issue between the rich and the poor.

He said Binay was wealthier than he, and the Vice President’s son had an elevator in his house. But Binay likes to pretend he’s one of the poor, Trillanes said.

“You’re fooling the people again. You’re pretending to be poor, but you’re living like a king in Hacienda Binay,” he said.

Trillanes said that at the next hearing of the Senate blue ribbon subcommittee, evidence would be presented to show that Binay owned the farm in Batangas.

He said Sen. Alan Peter Cayetano would present the evidence.

The ‘mystery man’ behind Binay