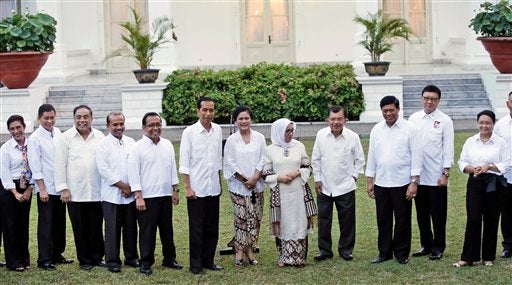 Reaction was broadly positive to the appointment of Retno Marsudi, Indonesia’s ambassador to the Netherlands, as foreign minister. Widodo, known as Jokowi, said that she “works hard and is firm and visionary.”

She was one of eight women in the cabinet in the world’s most populous Muslim-majority nation, more than in the previous government.

However, analysts expressed disappointment that so many politicians had been chosen instead of professionals, saying it could weaken Widodo’s attempts to push through much-needed reforms in the world’s third-biggest democracy.

Widodo, the country’s first leader from outside the political and military elite, had pledged to pick experts in various fields.

But he came under strong pressure from parties that backed him at the July elections, and in the end agreed to give almost half of the 34 cabinet posts to political allies.

There was particular concern that figures close to Megawati Sukarnoputri, head of Widodo’s party, featured prominently, adding to concerns the former president may seek to interfere in policy-making in the world’s third-biggest democracy.

“It’s cronyism,” University of Indonesia political analyst Arbi Sanit told AFP. “I am disappointed and have no confidence in this new cabinet, the ministers are all weak.”

However, the appointment of Bambang Brodjonegoro as finance minister and Sofyan Djalil as chief economics minister were welcomed, as they are seen as seasoned experts capable of invigorating the economy after a recent slowdown.

Sunday’s announcement was delayed by several days after Widodo asked the Corruption Eradication Commission (KPK) to vet the candidates and the anti-graft agency raised concerns about several.

“We carried out the process of choosing ministers carefully and meticulously,” Widodo said, as unveiled his cabinet during a ceremony at the state palace.

“This is a priority because this cabinet will have to work for the next five years. We wanted the chosen people to be clean so we consulted the KPK.”

He was seeking to avoid the mistakes of his predecessor, Susilo Bambang Yudhoyono, whose government was hit by a string of corruption scandals that dented its popularity.

Since the downfall of dictator Suharto in 1998 after three decades in power, it has been common practice in Indonesian politics for prospective leaders to promise cabinet posts to allies in exchange for support.

Widodo, 53, pledged to eschew backroom deal-making after beating controversial ex-general Prabowo Subianto in the election. But in the end, he agreed to give jobs to allies after coming under pressure.

Puan Maharani, the daughter of Megawati, was named head of one of four powerful “coordinating ministries,” which oversee several other ministries.

A close Megawati confidant, Rini Soemarno, was named state-owned enterprises minister, while another figure close to her, former army chief of staff Ryamizard Ryacudu, was selected as defense minister.

The coordinating ministry for maritime affairs, headed by Indroyono Soesilo, is new, reflecting Widodo’s ambition to make Indonesia a great maritime power through such measures as improving ports.–Arlina Arshad